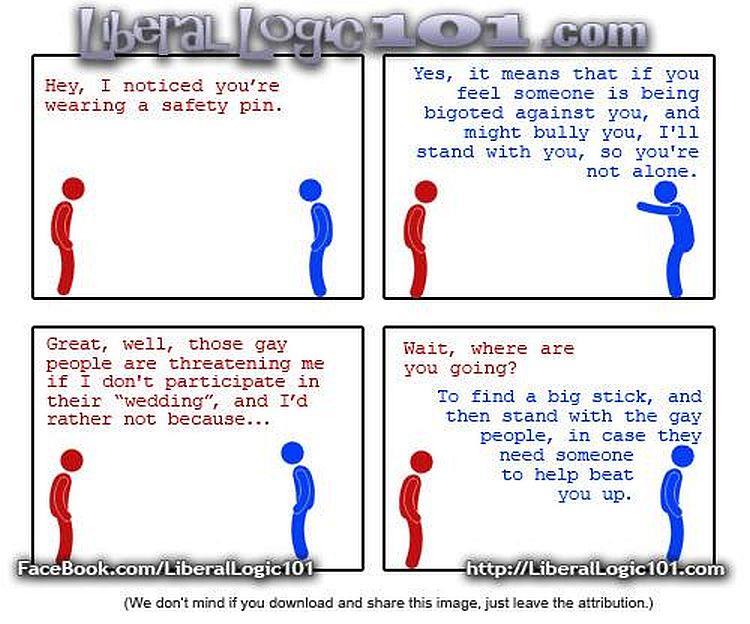 C.E. Dyer reports that if you see someone wearing a safety pin on their clothing (hopefully their clothing…) you need to be very careful; you may have encountered a special snowflake, i.e. a wussified bigot. When you encounter them in the wild, it’s best to go the other way lest you be subjected to their shrill, ear-piercing cries about how unfair the system is and their hatred of anyone that actually thinks for themselves.

According to The Hollywood Reporter, the safety pin movement began during Brexit so that anti-Brexit liberals could identify others that agree with them, because they wouldn’t want their flimsy arguments to be subject to scrutiny…

**PLEASE PARTICIPATE IN THIS TOMORROW!!** I know I haven’t been active in the last couple of days; I’m so very sorry. The election has taken me completely be surprise and I’ll admit I’m having a very rough time with it. Please keep America in your thoughts. Let’s always remember to spread love. ❤️ – – – – – – – – – – – – #booknerd #bibliophile #bookworm #bookaholic #bookstagram #safetypin #hillaryclinton #imwithher #strongertogether #hillyes #bookstagrammer #yalit #shelfie #booksonbooks #booklover

So #safetypin is happening: Pin one on you to show marginalized groups that they are safe with you, that you will help if they are attacked. pic.twitter.com/PGFlLVMFeN

Why just “marginalized groups?” Why wouldn’t you help anyone that needed your help? That sounds awfully discriminatory to me…because it is.

Ready to move forward with hope and in solidarity! You're safe with me❤️✊🏻✊🏼✊🏽✊🏿 #safetypin #safetypinamerica #safetypinUSA pic.twitter.com/hkD9fnoEG9

Just a quick side-note here: isn’t it a bit ironic that the whiny left that likes to constantly compare Trump to Hitler and his supporters to Nazis has started a movement to mark people, not unlike, well, the Nazis? They are marking themselves and as such, giving a negative mark (in their eyes) to those that don’t wear them. It looks like they threw the Nazi insult out there and it boomeranged right back in their face…

Michelle Goldberg of Slate wrote about the symbol: “We need an outward sign of sympathy, a way for the majority of us who voted against fascism to recognize one another.” Actually, it shows that not only are liberals who don the safety pin ignorant bigots, they are also so weak and pathetic that they can’t handle people with different opinions.

Goldberg further evidenced her bigotry and referenced Hillary Clinton’s infamous “basket of deplorables” comment about Trump’s supporters: “These are vicious days in America. The deplorables are emboldened.”

Plenty of real “deplorables” have been emboldened, like the young black thugs that attacked an older white man because they said he was a Trump supporter. These are vicious times and in many cases that viciousness is perpetrated by the “tolerant left.”

Hillary supporters “need to be able to see one another,” she added, implying that there are only two categories of people in this country now — those who voted for Trump and seek to harm others and those who are vulnerable to them, the Daily Caller reported.

The people who are doing the dividing in this country are the liberals who claim to be “tolerant” and “inclusive,” as their words and actions show that they are anything but.

It is a bad combination to be both a perpetual victim and a vicious victimizer, but that’s exactly what the left stands for and it is dangerous, destructive, and downright pathetic.