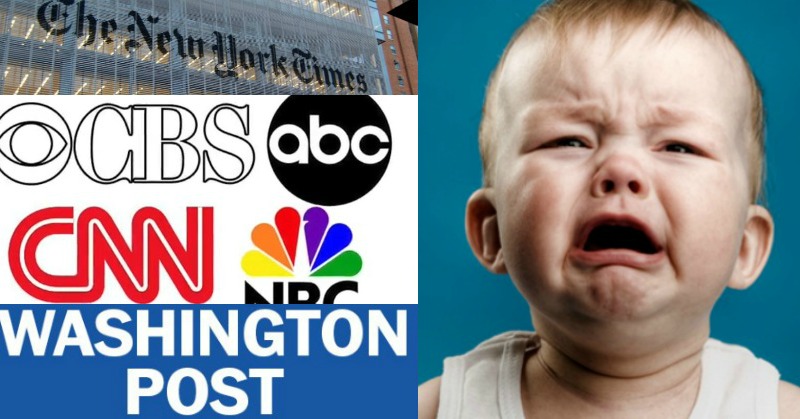 President Donald Trump held a joint press conference with Israeli Prime Minister Benjamin Netanyahu on Wednesday in which Trump decided to, gasp, take questions from outlets other than the liberal mainstream media. Of course, the entitled Democrat propagandists were aghast and took to Twitter to vent their frustrations over being rightly ignored by Trump.

Tried to push Democrat propaganda, that is — we know, that’s why Trump didn’t call on you.

Trump went ahead and asked questions from the Christian Broadcasting Network and Townhall.com, something he has every right to do, but the MSM wasn’t having it.

Chris Cillizza of one of the worst fake news purveyors in the country, The Washington Post, threw a Twitter tantrum: “Trump has called on ONLY conservative outlets in his last 3 joint press conferences.”

Trump has called on ONLY conservative outlets in his last 3 joint press conferences.

So — the two reporters called on today: Christian Broadcasting Network and Town Hall. No question on Trump/Russia contacts.

How laughable is it that the delusional MSM thinks that Trump has to focus on the propaganda that they try to clog the news cycle with. Wrong, he’s doing the American people a service by ignoring the fake news hacks and their B.S.

Acosta further whined that “the fix is in” since Trump decided to call on conservative outlets.

CNN reporter @Acosta after Trump calls on only right-wing outlets for the third straight press conference: "The fix is in" pic.twitter.com/FPtaGEIenC

The truth is that Trump is making a huge move to right the balance in the media. The liberal mainstream media has shamefully cloaked themselves as the fourth estate in this country and lied to the American people.

They hold themselves up as impartial journalists when they are truthfully nothing more than the Democrat Party’s propaganda arm.

The way the pathetic MSM reported on former President Barack Obama evidenced this in a big way and also showed how disturbing and dangerous it is for the MSM to claim that they are the only legitimate media.

By doing so, Obama was able to skate by for eight years by nearly exclusively taking questions and interviews from friendly leftist outlets under the guise of calling on the “legitimate media.”

That is crap and the American people know it. In response, the American people voted in Trump, who rightly called out the MSM and is willing to take them on and give voice to the millions of Americans who have been screwed by the biased elitism of the MSM for far too long.

Your monopoly on the media is over, guys — get used to it.