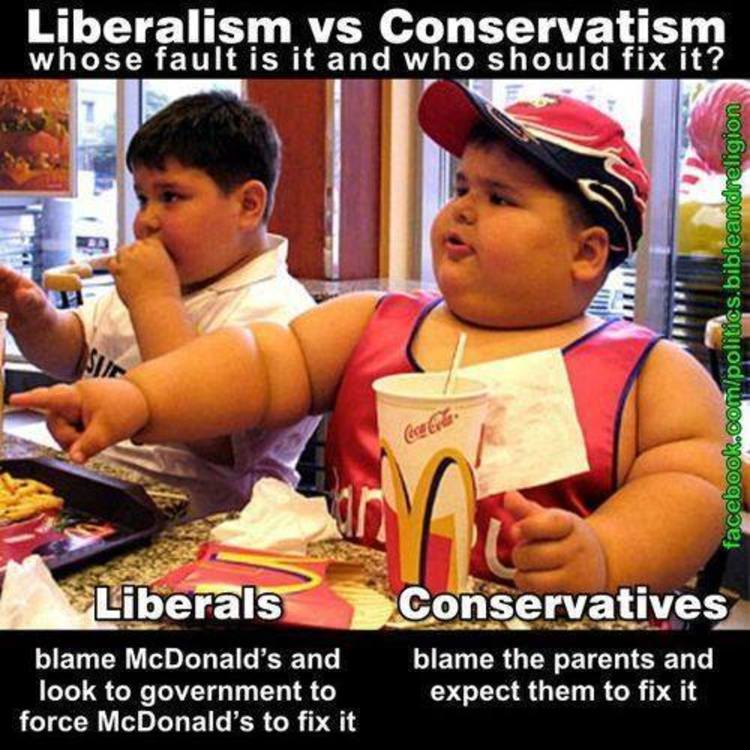 National Review explains one of the big differences between liberals and conservatives comes down to how each regard the role of government:

The Left believes that the state should be the most powerful force in society. It should be in control of educating every child; it should provide all the health care for all its citizens; and it should supervise just about all other areas of society. There should be no competing power. As to the all-important question of how much government is too much government, I have never encountered a person of the Left who had an answer to that question.

Conservatives believe that the individual, not government, is the essential component of a good society. The government’s role in society should be limited to absolute necessities such as national defense and the resource of last resort to help citizens who cannot be helped by other citizens, private organizations, or charities.

Conservatives understand that as governments grow in size and power, the following will inevitably — yes, inevitably — happen:

1. There will be ever-increasing amounts of corruption. Power and money breed corruption. People in government will sell government influence for personal gain. This is as true for America as it is for Africa and Latin America, where government corruption is the single biggest factor holding nations back from materially progressing.

2. Individual liberty (outside of sexual behavior and abortion) will decline. Liberty is less important to the Left than to the Right. This is neither an opinion nor a criticism. It is simple logic. The more control the government has over people’s lives, the less liberty people have. The bigger the government, the smaller the citizen.

3. Countries will either shrink the size of their government or they will eventually collapse economically. Every welfare state is a Ponzi scheme, relying on new payers to pay previous payers. Like the Ponzi scheme, when it runs out of new payers, the scheme collapses. European countries, all of which are welfare states, are already experiencing this problem to varying degrees.

4. Taxes are constantly increased in order to pay for the ever-expanding government. But at a given level of taxation, the society’s wealth producers will either stop working, work less, hire fewer people, or move their business out of the state or out of the country.

5. The big state inevitably produces large deficits and ever-increasing — and ultimately unsustainable — debt. This is only logical. The more that the state hands out money — to gobernment employees as salaries and pensions; to state agencies (education, environment, energy, transportation, and myriad others); and to individual citizens (monthly cash welfare grants, rent subsidies, health care, unemployment benefits, education, college loans, meals, food stamps, etc.) — the more the government employees and agencies, and the citizens who receive government aid, will demand. None of them has ever said, “No more, thank you. I have enough.” Greece’s unpayable debt is only the beginning. Unless big governments get smaller, they will all eventually collapse of their own weight — with terrible consequences socially as well as economically.

6. The 20th century was the most murderous century in recorded history. About 200 million people, the great majority of them noncombatants, were killed; over a billion people were enslaved by totalitarian regimes. And who did all this killing and enslaving? In every case, it was a big government. The bigger the government, the greater the opportunities for doing great evil. Evil individuals without power can do only so much harm. But when evil individuals have control of a big government, the amount of bad they can do is unlimited.

7. Finally, the moral impact of big government on its citizens is awful. Not only do people stop taking care of others — after all, they know the government will do that — they stop taking care of themselves as well. And the more people come to rely on government, the more they develop a sense of entitlement, which then leads to a nation of ingrates.

Other than all that, big government is terrific. See Greece. Or Puerto Rico. Or Detroit. Not to mention the Soviet Union, North Korea, or Mao’s China.