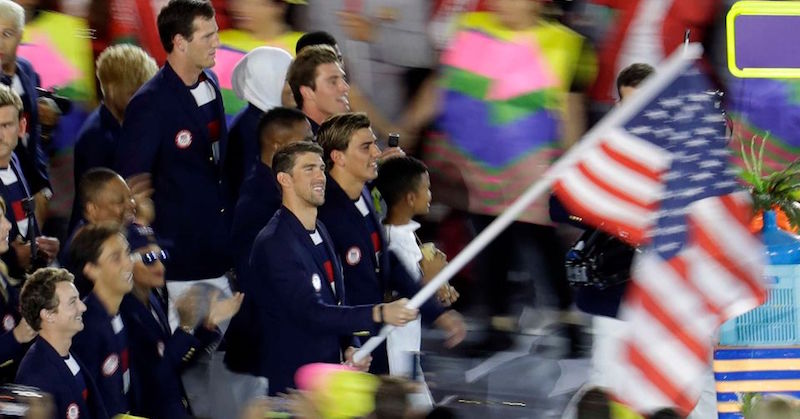 While almost everybody was cheering on Michael Phelps, the über-Olympian who was given the honor of carrying the American Flag during the opening ceremonies, not everybody was filled with patriotic pride.

Liberals were aghast that Phelps – who has won more Olympic medals that anyone else in history – would be representing the United States of America because – wait for it – he’s a white guy.

The Olympic participants get to vote on who should carry the flag during the opening ceremonies. Phelps won and Muslim-American Olympian Ibtihaj Muhammad placed second.

But that doesn’t matter to bed-wetting liberals. See, they think having a white guy represent the United States is a bad thing. It sends “the wrong message.” They think Phelps should have turned the flag over to Muhammad.

Which message, exactly, are we sending that’s “wrong”? That you are rewarded for your accomplishments based on your excellence and the democratic selection of your teammates? No. That’s not it. The message that we’re supposed to send is a racist message: That this country is no longer a meritocracy. It’s just another dumpy trashheap country that picks and chooses its winners based on race – or religion, or social engineering or some such garbage.

CNN Host W. Kamau Bell started off our racist assault on Phelps in a letter ostensibly addressed to him:

Your stepping back will allow this moment to become something bigger than just another opening ceremony. No offense, but right now America has enough tall, successful, rich white guys hogging the spotlight trying to make America great … again.

What total rubbish. But we’re not done.

when she competes (she’s a fencer), that she should get to carry the flag:

I wish Ibtihaj Muhammad was the flag bearer at the #RioOlympics instead of bland, stale ass Michael Phelps. ✋??

Hard to argue with Michael Phelps carrying the U.S. flag in the opening ceremonies, but Ibtihaj Muhammad would have made a real statement.

That last guy – Luke DeCock (is that his real name?) is a sports columnist who tells us he’s written “3 sports books for kids.” Good for him.

I’m happy for Muhammad. She’s got an inspiring story. Good for her. But the fact that she’s Muslim or wears a hijab while she competes should not matter to us at all. We don’t care. That’s what makes America great. Not focusing on someone’s religion, or the color of their skin, or their gender. It’s their accomplishments, their skill that makes them great. 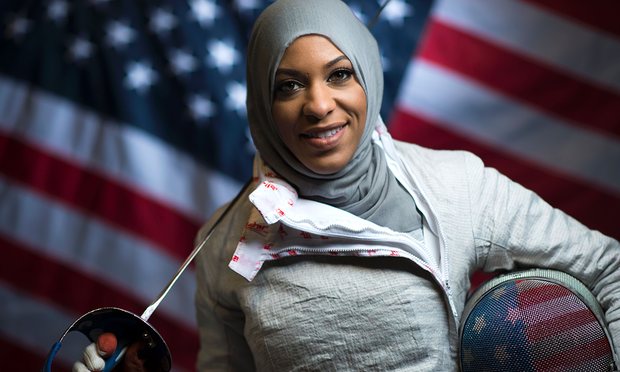 Anything less is just un-American. And offensive.

We don’t know whether or not Phelps asked Muhammad to carry the flag. Maybe she respectfully declined, telling Phelps that he won and he should carry the flag.

I hope so. That’s the classy thing to do. As an accomplished Olympian, I wouldn’t be surprised if that’s exactly what she did.