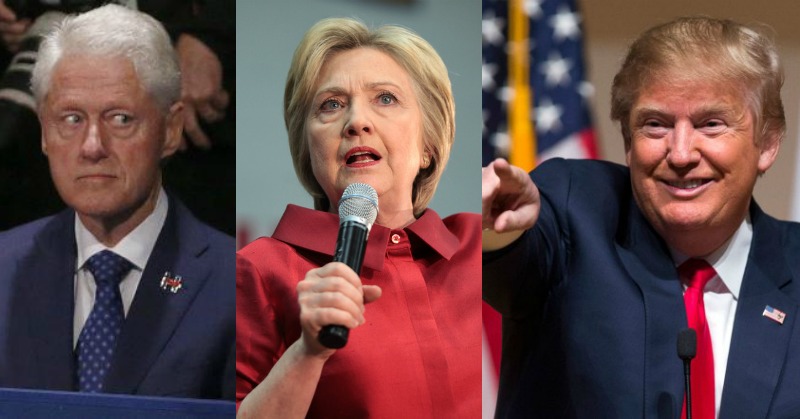 The left was predictably, and ignorantly, outraged about GOP presidential nominee Donald Trump’s promise that, if he is elected, he will appoint a special prosecutor to look into former Secretary of State Hillary Clinton’s mishandling of classified information — and probably her numerous other crimes.

Liberals cried “banana republic!” in response to Trump’s call for justice against Clinton. Well, not only are they hypocrites, they’re also downright wrong.

Trump did not call for the prosecution of Clinton simply because she is his opponent, as the left ridiculously claimed. Once again, liberals don’t grasp the fact that Clinton is a criminal and justice has not yet been served.

What Trump did on stage was promise the American people — many of which are angry, frustrated and have lost any faith they had left in the justice system — that he would do his part to hold Clinton accountable for her actions.

In addition to this fact, their outrage is also, predictably, wildly hypocritical. Clinton has on her hands the blood of the four Americans who died in the Benghazi, Libya terror attacks on Sept. 11, 2012. That’s not the end of her misdeeds here either.

Clinton blamed an internet video for the deaths of those Americans even though she sent an email to her daughter (who felt the need to email under the pseudonym “Diane Reynolds” despite Clinton’s laughable assertion that her homebrew server was secure) in which she admitted that she knew that wasn’t the case.

Because of this dubious lie to protect herself, a Coptic Christian named Nakoula Basseley Nakoula, the man who created the film that was erroneously blamed for the attack, was jailed and has had his life ruined.

Nakoula Basseley Nakoula, the Coptic Christian whose short video “The Innocence of Muslims” was initially faulted for sparking the Sept. 11, 2012 terror attack at U.S. diplomatic compounds in Libya, is now living in a homeless shelter run by First Southern Baptist Church in Buena Park, Calif. He has served time in prison, been shamed publicly by the White House and threatened with death.

Trump wants to hold Clinton responsible for her criminal actions as Secretary of State and the left has a conniption fit, but when a man has his life ruined over an internet video…meh, “what difference, at this point, does it make?”

Clinton likely covered up her responsibility for Benghazi via the destruction of thousands of her emails. FBI Director James Comey is in on it, the Department of Justice is in on it — Marc Turi has had his charges for dealing weapons to the Libyan rebels dropped by the DOJ to cover up Clinton’s crimes — but according to the left, Trump vowing to hold her accountable is the “banana republic” situation.

No, actually, Clinton’s massive corruption and the establishment’s disgusting coverup of it should concern all of us and any decent, law-abiding American should want Clinton to face justice for her crimes. They should not be okay with the fact that Clinton and powerful elites aren’t held to the same set of laws as the rest of us are.

If liberals are so worried about a banana republic, then perhaps they should ask themselves why they’re voting for the woman holding the peel?