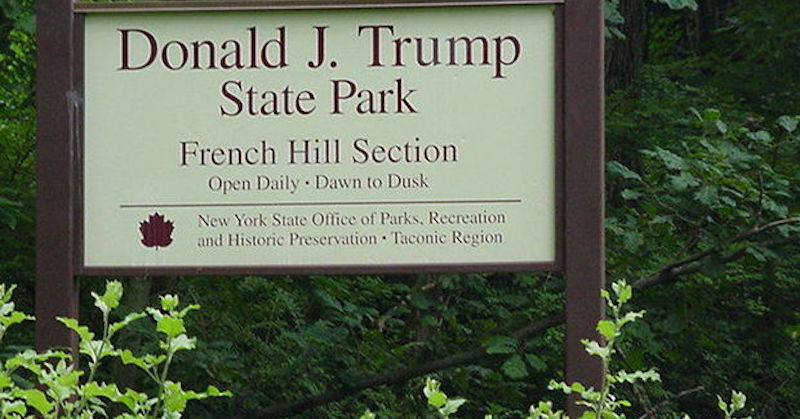 Liberals are flailing about doing everything they can to attack Donald Trump.

Despite the massive donation, Democratic lawmakers are trying to strip his name from the park and replace it with a folk singer, or Revolutionary War hero or something.

Fox News is reporting two liberal lawmakers plan to introduce the “Anything But Trump Act,” (yes, it’s that transparent), which would remove the name – and the signs – from a closed 440-acre park in Westchester County.

They claim – these two assemblymen – that Trump’s “Anti-Muslim” rhetoric is so horrible, that even the sight of the man’s name will cause the vapors.

Trump donated the land ten years ago after a planned golf course fell through. Four years later, budget cuts forced the closing of the park. But it’s still a state park, it’s still got his name on it and it’s still there.

Assemblyman Charles Lavine – who sponsored the “Anything But Trump Act,” has some ideas who they should rename the park after:

Lavine, of Long Island, suggests the state rename the park for Peter Salem, a Muslim Revolutionary War soldier from Massachusetts who fought in battles in New York state. Other suggestions include folk singer and activist Pete Seeger.

“The rhetoric and discriminatory proposals we’ve seen from Mr. Trump don’t belong in the presidential election, and don’t belong in New York state parks,” said Squadron, of Brooklyn. “He has dishonored the state, and should not be honored with a state park named for him.”

Donald Trump has a solution: “If they want, they can give me the land back.”

A spokesman for Cuomo declined to comment on the matter. On Monday, the Democratic governor said Trump’s comments and his proposal to ban Muslim immigration do a “disservice” to the country and could actually encourage terrorist recruitment efforts.

“He is fanning the flames of hate,” Cuomo said on CNN. “One billion Muslims were just alienated with one sentence. At this point we don’t need more Muslim enemies. We need more Muslim allies.”

As a side note, Rachel Maddow did a piece on the park several months ago. She tried to make fun of it – showing video of graffiti and dilapidated buildings. But it’s a huge fail. What does she think a State Park should be? Most of t looks beautiful, despite being closed five years ago. Untamed woods just a short drive away from New York City? Sounds good to me.