If you think college is expensive now, just wait until its free.

There’s nothing that drives the cost of college tuition up more than increasing financial aid – so guess what’s going to happen when you don’t have to write a check for it?

That doesn’t matter to libs who spout the “free college” line trying to attract young people by arguing that their personal debt should be shouldered by society. 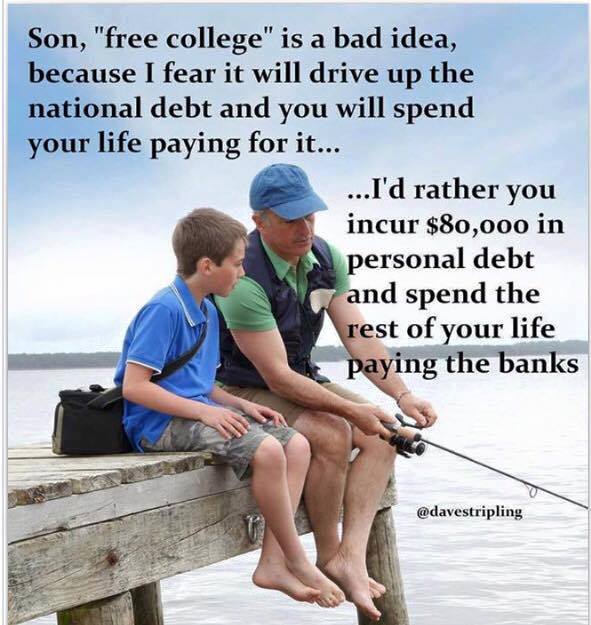 The meme shows a father and son fishing off a pier. The father says: “Son, ‘free college’ is a bad idea, because I fear it will drive up the national debt and you will spend your life paying for it … I’d rather you incur $80,000 in personal debt and spend the rest of your life paying the banks.”

This is idiotic of course.

The biggest suggestion from this meme is that most Americans who go to college end up with massive debt. It’s simply not true. For those who can’t afford it, there are literallybillionsin loans, grants and scholarships available – and it increases every year.

The irony is all that financial aid is causing the cost of tuition to skyrocket. As Forbes reported last year, student financial aid programs allow colleges to actually raise their tuition costs, knowing that the students won’t be shouldering most of the burden – that the feds will pick up the costs.

Here’s what happened 30 years ago:

Former Education Secretary Bill Bennett argued in 1987 that federal student financial aid programs allow colleges to raise fees substantially, and that the colleges thus  capture monies meant for students. Federal student financial aid has permitted higher tuition fees, and helped finance an academic arms race where universities have hired small armies of bureaucrats, given professors low teaching loads so they can write articles on obscure topics that no one reads, and led to a building boom of ever more luxurious facilities, including climbing walls, lazy rivers, and the like.

So what happens when students don’t have to payanything

? The same thing, only explosive. Imagine a massive bureaucracy of entrenched liberal academics, all suckling at the teat of the taxpayer.

Trying to control the spiraling cost of higher education by increasing student financial aid – or worse yet – make it free is like throwing gasoline on a fire.