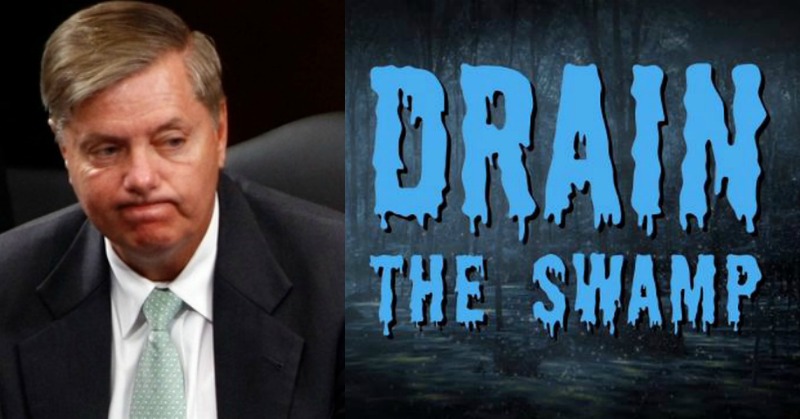 Time…to…drain…the…swamp. South Carolina Sen. Lindsey Graham has announced on Twitter that he voted for independent “Republican” presidential candidate Evan McMullin, illustrating once again why many Americans have rejected fools like him in the establishment who have sold us all out.

South Carolina senior Sen. Lindsey Graham said he did not vote for former Secretary of State Hillary Clinton or businessman Donald Trump in the race for president.

In a series of tweets, Graham explained his electoral decision. Graham spent most of the year being one of Trump’s most vocal detractors in the Republican Party.

I enthusiastically cast my ballot for my friend and colleague @VoteTimScott and other down-ballot Republicans running for office. #1

In the prez race, voting for Hillary Clinton was always a non-starter and I couldn’t go where Donald Trump wanted to take the USA & GOP. #2

I voted @Evan_McMullin for President. I appreciate his views on a strong America and the need to rebuild our military. #3

Really? “I appreciate his views on a strong America and the need to rebuild our military.” Graham tweeted. Pretty sure Donald Trump has talked about that too, so that explanation doesn’t hold water.

Graham and other establishment hacks really want a Hillary Clinton presidency and they play the “principled” card to try and hide what has become painfully obvious over the years — globalists in both parties are one in the same.

Many truly “principled” people didn’t want to vote for his buddy Sen. John McCain back in 2008, but they held their noses and did so because they knew what a Barack Obama presidency would mean. Graham and his ilk are anything but principled.

“In the prez race, voting for Hillary Clinton was always a non-starter,” Graham wrote in his second tweet. Translation: he didn’t want to out-and-out vote for Clinton, so he took the cowardly smoke-and-mirrors route of doing the same thing, to keep up the facade that there’s a difference between the globalists in the two-party system.

He continued, “and I couldn’t go where Donald Trump wanted to take the USA & GOP.”

Of course, where Trump wants to go is in favor of the people and national sovereignty — we certainly can’t have that. What kind of party would the GOP be if it actually put the interests of its voters first? The kind of party it should be, that’s what.

Here are some of the responses:

@LindseyGrahamSC @Evan_McMullin What a sour loser you are Lindsey

@LindseyGrahamSC Hope you enjoy 4 more yrs of Obama and obstructionism, because that’s what you voted for #draintheswamp

@dutchbuilder Surrender Party doormats like @LindseyGrahamSC prefer Hillary & he SCOTUS to will of GOP voters. Couldn't be more clear.

Trump has shed light on these RINOs and exposed them for exactly what they are. They know that their time is up and their petulant behavior speaks volumes.