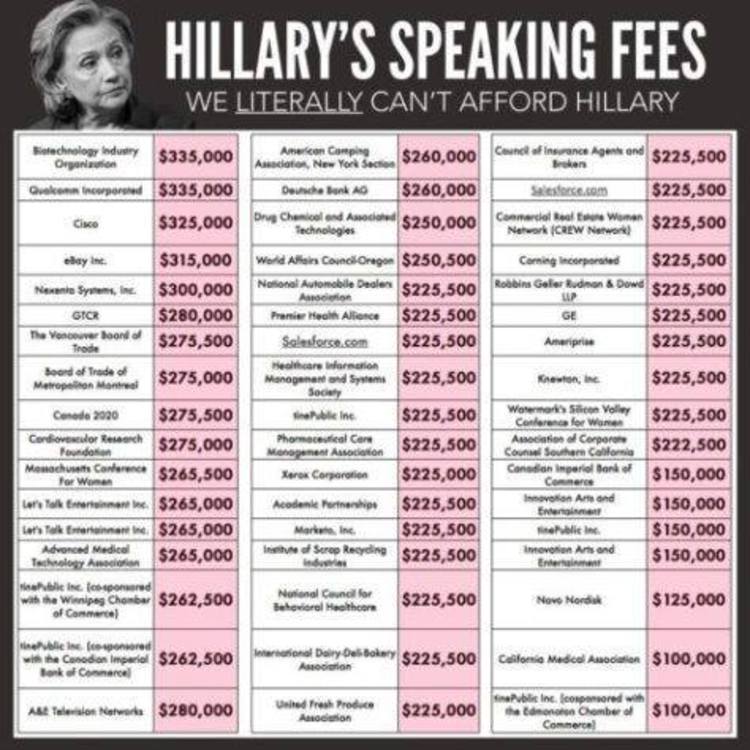 Brian Thomas reports that the Clinton campaign has long refused to release transcripts from speeches Goldman Sachs paid her big bucks to make.

Wikileaks released part one of what it dubbed the “Podesta emails“, which it describes as “a series on deals involving Hillary Clinton campaign Chairman John Podesta. Mr Podesta is a long-term associate of the Clintons and was President Bill Clinton’s Chief of Staff from 1998 until 2001. Mr Podesta also owns the Podesta Group with his brother Tony, a major lobbying firm and is the Chair of the Center for American Progress (CAP), a Washington DC-based think tank.”

While the underlying story in this specific case involves the alleged kickbacks received by the Clinton Foundation from the Russian government-controlled “Uranium One”, […] what caught our attention is an email from Tony Carr, a Research Director at Hillary for America, in which he lay outs hundreds of excerpts from the heretofore missing transcripts of Hillary Clinton’s infamous Wall Street speeches, with an emphasis on those which should be flagged as they may be damaging to Hillary.

Here’s just a few excerpts of what’s been released so far:

CLINTON ADMITS SHE’S OUT OF TOUCH WITH AVERAGE AMERICANS:

CLINTON SAYS YOU NEED TO HAVE A PRIVATE AND PUBLIC POSITION ON POLICY:

But there’s no telling what else might be out there.

Only time will tell…