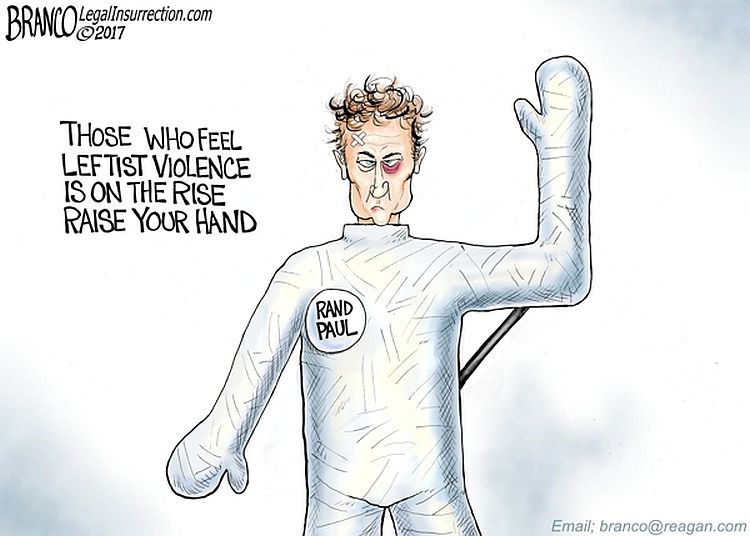 Remember when a disgruntled neighbor assaulted Kentucky Senator Rand Paul back in November while the unsuspecting Republican was mowing his lawn, leaving him with multiple fractured ribs?

It was a shocking crime made all the more bizarre by the confusion over the motive — or lack thereof — of the attacker, Rene Boucher. Now, Breaking 911 reports, the audio of the original 911 call has been released. You can listen to it right here:

PAUL: Um, I was assaulted by my neighbor, and I just, it’s not a life and death thing but I’d like to have a police car come by.

911: Okay, let me put you through to the state police. Stay on the line, okay?

PAUL: You gonna send somebody?

911: I’m gonna put you through to the state police. Stay on the line, okay?

PAUL: I was assaulted by a neighbor, and I’d like the police to come investigate and talk to the neighbor.

PAUL: In my yard, while I was mowing the grass.

It’s interesting that Paul made the call himself, and that, in this audio at least, at no point does Paul attempt to throw his position as a United States Senator around in hopes of getting any kind of special treatment.

Boucher faces federal charges for willfully injuring a federal officeholder. He has since signed a plea agreement, though his punishment remains undetermined.

“Just as we are committed to protecting the American people, the FBI will not tolerate violence directed against members of Congress,” FBI Special Agent Amy Hess said. “Those who choose to assault any federal official are certain to face serious consequences.”

Boucher has admitted to his crime but denied that it was politically motivated in any way, instead maintaining that he more or less snapped after observing Paul stack a brush pile near Boucher’s property.

Boucher and his attorney have attempted to argue that he was driven over the edge by a history of Paul being an inconsiderate neighbor, particularly pertaining to lawn care, but as TFPP has previously reported, there is reason to doubt all of his claims.

Legal analysts have expressed skepticism that federal authorities would involve themselves if they did not believe Paul’s office was a motivating factor, Boucher appears to be a registered Democrat with a history of anti-Republican statements on social media, and a number of the two men’s neighbors have rebuked any claim that Paul was less than a sterling neighbor:

“The Pauls’ landscaping looks just like everyone’s place in Rivergreen. Wish I could get him to cut my lawn,” said neighbor Robert Warner. “As a friend, neighbor and senator, Rand has been first class in every way. What I find amazing is the fact that he cuts his own grass. Our neighborhood is fortunate that the Paul’s live here,” he added […]

Neighbor Alicia Stivers express shock at the violence of the attack. “I have never heard Sen. Paul speak an unkind word about anyone, let alone become physically violent. Which makes it all the more shocking that a next-door neighbor of many years who has not so much as exchanged an email or spoken word with Rand in several years, would race downhill and pummel Rand from behind.”

What do you think the truth behind this bizarre incident ultimately was? Let us know in the comments below.