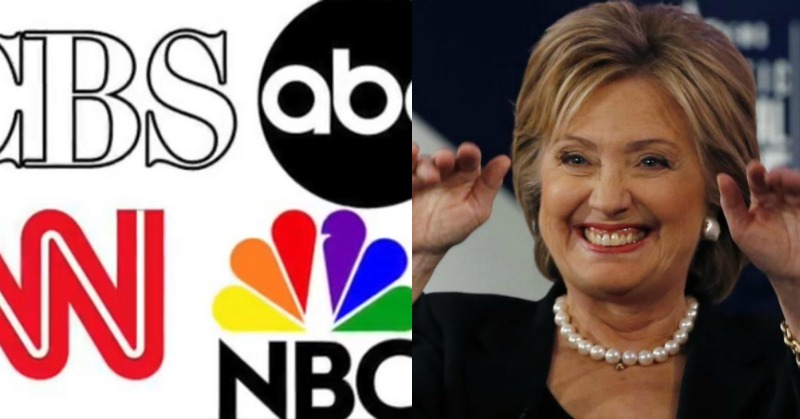 We’ve had ample confirmation that the mainstream media operates as an arm of the Democrat Party, but sometimes facts and figures come out that are shocking in how brazen they are about it.

The media has glommed on to the tape of GOP presidential nominee Donald Trump making lewd comments 11 years ago, and all the while WikiLeaks has released thousands of emails providing enormous amounts of damning information about Democrat nominee Hillary Clinton. Which do you think the media spent more time on?

Of course, if you’ve watched the news at all this week, you know the answer, but take a look at this graphic — it’s amazing to see in concrete numbers how bad the mainstream media really is.

The media is in the bag for Clinton, but this is truly extraordinary. Between ABC News, NBC News, and CBS, they covered the Trump tape for 23 minutes during one night of coverage. The Clinton WikiLeaks revelations got just 56 seconds of coverage — with NBC News omitting it altogether.

There are two major differences between the Trump tape (and subsequent spurious allegations) and the Clinton revelations.

What Trump said 11 years ago, lewd as it was, has little effect on any of us personally or the future of this country. It’s not terribly likely to have much of an effect on any of our lives — not in the way Clinton’s scandals and policies will.

The subsequent allegations against Trump are highly questionable as well. That said, Bill Clinton was also accused by multiple women of sexual harassment and assault — as well as rape — and admitted to extramarital affairs. His actions alone are far worse than Trump’s words or any of the spurious allegations trotted out by the left.

Hillary Clinton went on to silence the women who accused her husband of heinous crimes. She smeared, threatened, and bullied them as she led the “bimbo eruptions” operation against these women — all while she has disturbingly claimed to be a champion of women.

She called it a “vast right-wing conspiracy” when her husband’s actions came to light and recently made it clear that she plans to wage a war against conservative media and the Second Amendment.

This just scratches the surface on how dangerous a Clinton presidency would be and exactly what we’re all fighting against. Trump is the messenger and we cannot be manipulated by globalist establishment elites in this country that want to use smoke and mirrors to distract us.

This is us vs. them. There’s no two ways about it and we have to remember that. The future of this country is at stake and if we don’t fight this war now, there may never be another chance.