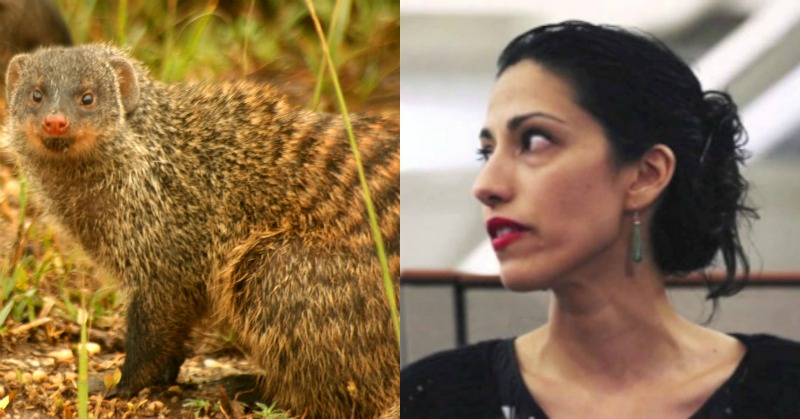 Democrat presidential nominee Hillary Clinton’s top aide Huma Abedin claimed that her Muslim faith got her through her disgraced husband’s, former Rep. Anthony Weiner, sexting scandal — a scandal that is allegedly still going on, although Weiner claimed he totally knew he was being catfished.

Abedin told Vogue Magazine that she relied on her Muslim faith to get her through the scandal that forced Weiner to resign from Congress and caused his New York City mayoral campaign to crash and burn.

“I tried to block out all the noise and move on with my life,” Abedin said.

I didn’t think there was anything that could erase the images forced upon us by “Carlos Danger,” who, as we recently found out, is deceptively strong, like a mongoose.

Abedin and Clinton appear to be very close — and it’s no surprise, given that they both seem to have similar marriages where they look the other way while their “husbands” humiliate them. The two do seem to lean on each other quite a bit…allegedly.

If you’ll recall, Abedin’s family has ties to the Muslim Brotherhood. Perhaps this, coupled with Clinton taking money from countries that commit egregious human rights abuses in the Middle East, is the “faith” that binds them and gets them through.

As the New York Post noted, Abedin wasn’t “completed” by Weiner’s looks, which surprises absolutely no one: “One of the things that, because we became friendly, I found striking about Anthony was how smart he was, what a great debater he was. He was smart, he was passionate.”

“We’d walk through the neighborhood, and people would stop him on the street and say, ‘Congressman, I need help with something,’ and he’d pull out a pen and paper. He was always very meticulous about following up,” Abedin told Vogue.

Perhaps a little too meticulous about “following up?”

Abedin said of their fateful first meeting: “I ordered tea, and then left to use the ladies’ room, and then never came back. That was our first meeting.”

She probably should have kept on walking, but then again anyone that would work for Hillary Clinton clearly doesn’t have the best judgment.

It is strange, though, that her employer and her spouse are natural enemies: the snake and mongoose.