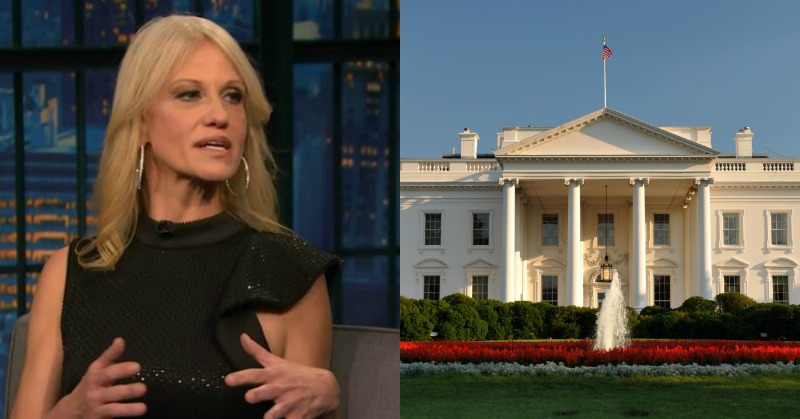 Kellyanne Conway encouraged people to buy Ivanka Trump’s clothing line Thursday morning after President Trump tweeted about how Nordstrom had treated his daughter “unfairly” by pulling her clothing line amid leftist protests (they claim it was based on sales numbers, although there are reports that say otherwise), and the White House noted that she had been “counseled” about federal ethics standards in response.

“Kellyanne has been counseled and that’s all we’re going to go on,” White House Press Secretary Sean Spicer told reporters later in the day after Conway’s comments on “Fox & Friends.” “She’s been counseled on that subject and that’s it.”

Conway raised eyebrows when she told viewers to “go buy Ivanka’s stuff” in protest of Nordstrom’s decision earlier this week to drop her clothing line from its stores.

A government ethics watchdog moved quickly to file a complaint with the Office of Government Ethics over the appearance. Rep. Elijah Cummings, D-Md., the ranking Democrat on the House Oversight Committee, has called for Conway to face consequences for her comments.

Wow, it sure would have been nice if people had been this outraged about the many egregious things that occurred during the Obama administration that had much more far-reaching effects on Americans than Conway’s comments.

There has been a great deal of debate about whether or not Trump should have sent a recent tweet about Nordstrom treating his daughter “unfairly,” and now Conway’s comments have certainly added fuel to the fire.

I’ll tell you what, I’ll show an iota of concern about this honestly pretty minor issue (not saying she should have said it, but in the grand scheme of things…) when Hillary Clinton faces the music for her infinitely more egregious crimes.

Until then, if people want to be outraged about Conway’s comments as the next shiny thing, do what you want, but as far as I’m concerned there are far bigger fish to fry, and the Nordstrom controversy is far more layered than that whether she or Trump should have said what they said.

If Nordstrom is in fact discriminating against Ivanka over politics, while it is their right (although if they are, they have cowardly refused to own up to it), it is also the right of consumers to speak up with their wallets.

That goes both ways, of course, and it’s not terribly unreasonable to encourage those who are fed up with the left’s discrimination, bigotry, and hate to speak up with their wallets if they so choose and to let people know that they have a voice.

I’m no expert on federal ethics standards, and I wouldn’t be surprised if it does amount to a violation. Moreover, even though I’d argue that one of the biggest issues the country faces comes from the American left via their hate, bigotry, and promotion of violence/anarchy, globalism, etc., this probably wasn’t the hill Trump and Conway should have died on.

It probably is an ethical violation and it really doesn’t appear to be something that was a great idea to have dipped her toe into, nor the president — even though I agree with their sentiment.

That said, I can absolutely see both sides to this and more importantly, I’m not going to waste any outrage over a comment that is much more nuanced and important than just an endorsement of a product, nor is it frankly that big of a deal in the grand scheme of things.

Since Clinton currently walks free despite her egregious crimes — particularly her responsibility for the deaths of four Americans in Benghazi, her disregard for and endangering of national security, the pay-to-play scandal via the family slush fund — I can’t manage to muster much concern over Conway’s comments about a clothing line.

If the left wants to talk about consequences, where are Clinton’s?