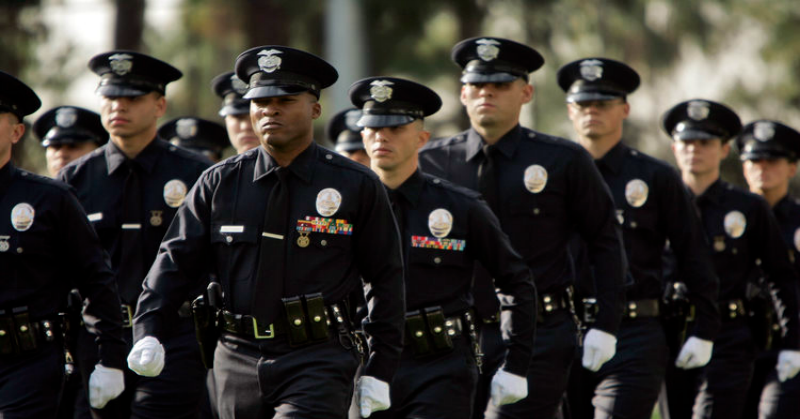 The Obama presidency drove the morale of our men and women in blue right into the tank. He spoke out about high-profile crimes involving black victims, and what he had to say generally wasn’t very complimentary of the police.

We all remember him addressing the Cambridge police arrest of Harvard professor Henry Louis Gates Jr. for “disorderly conduct.“

“I don’t know – not having been there and not seeing all the facts – what role race played in that, but I think it’s fair to say, number one, any of us would be pretty angry; number two that he Cambridge police acted stupidly in arresting somebody when there was already proof that they were in their own home.”

That was the moment that America realized that this man was not going to support our officers.

While in Warsaw, Poland, Obama decried what he called “police brutality,” which he believes is rooted in racial tension. When discussing the Michael Brown shooting, he said that there was “no excuse” for police violence, and “no excuse for police to use force against a peaceful protest.” At that same conference he announced that there would be justice for Brown, and said that he had directed the Department of Justice to counsel local authorities on “less provocative ways” to ensure public safety.

To his credit, Obama did call for an end to attacks on police, and said it is “completely unacceptable.” Unfortunately, this was too little too late.

Contrast that with the way President Trump has talked about police, and how our LEOs feel emboldened by his presidency.

“Our job is not to make life more comfortable for the rioter, the looter, or the violent disrupter,” the Trump administration says, while adding that “supporting law enforcement means supporting our citizens’ ability to protect themselves.”

In November of 2016, the executive director if the Fraternal Order of Police said that he hopes Trump will be able to positively influence public opinion of officers.

“The first thing, and something Mr. Trump has already done well, is use the bully pulpit to improve the perception of police officers,” said James Pasco, executive director of the National Fraternal Order of Police.

An editorial in Police detailed the hope some officers have for a pro-LEO presidency.

Trump, for all of his flaws and his mistakes on the campaign trail, seems to support law enforcement officers. A year ago he spoke in front of officers in the Northeast about his support for a federal death penalty for cop killers. He also actively sought the FOP’s endorsement and received it. “[Trump’s] made a real commitment to America’s law enforcement, and we’re proud to make a commitment to him and his campaign by endorsing his candidacy,” National FOP President Chuck Canterbury told Politico.

When the police are allowed to do their job without fear that they are going to be personally targeted by the President of the United States and his lapdog media, everyone is safer. Yes, we absolutely should call out abuse of power by police officers because it is going to happen, but we don’t have to pretend that everything a cop does is an egregious act of oppression.