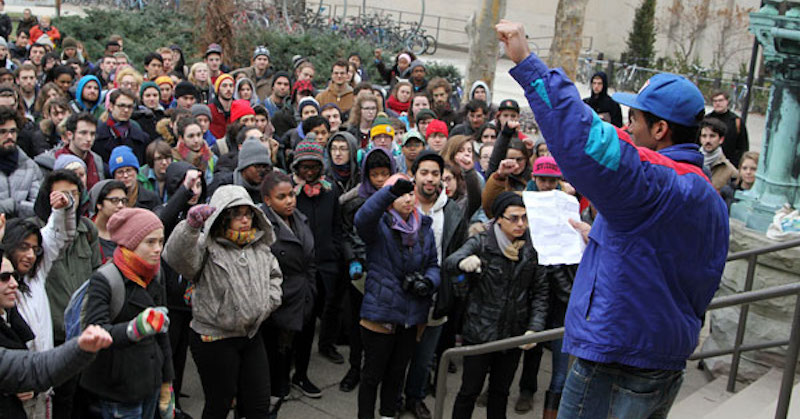 When you give in to the demands of the insane, effectively letting the inmates run the asylum; this is what you get.

College students turned race-baiting protesters across the country are seeing the success of their idiotic “demands” at other institutions – presidents resigning, Confederate flags and historical names coming down, “diversity” funding, curriculum changing. So they’re demanding more and more and more.

The demands are now past the level of stupid, yet they keep coming.

(not polite requests, they’re reminding us, but unmalleable demands)that include

being paid to protest, The Daily Caller isreporting

That’s right. In their long and exhausting list of demands is this little gem:

It’s the most insane demand in a long list of insane demands but in today’s climate, I wouldn’t be surprised if they get it.

Lest you think their “demands” come from a place of goodwill, take a look at how the 14-page rant begins:

Oberlin College and Conservatory is an unethical institution. From capitalizing on massive labor exploitation across campus, to the Conservatory of Music treating Black and other students of color as less than through its everyday running, Oberlin College unapologetically acts as unethical institution, antithetical to its historical vision. In the 1830s, this school claimed a legacy of supporting its Black students. However, that legacy has amounted to nothing more than a public relations campaign initiated to benefit the image of the institution and not the Africana people it was set out for. Along the same lines stated by UNC Chapel Hill students in their 2015 document “A Collective Response to Anti-Blackness,” you include Black and other students of color in the institution and mark them with the words “equity, inclusion and diversity,” when in fact this institution functions on the premises of imperialism, white supremacy, capitalism, ableism, and a cissexist heteropatriarchy. Oberlin College and Conservatory uses the limited number of Black and Brown students to color in its brochures, but then erases us from student life on this campus. You profit off of our accomplishments and invisible labor, yet You expect us to produce personal solutions to institutional incompetencies. We as a College-defined “high risk,” “low income,” “disadvantaged” community should not have to carry the burden of deconstructing the white supremacist, patriarchal, capitalist system that we took no part in creating, yet is so deeply embedded in the soil upon which this institution was built.

Did you get through that? Did you pause at “cissexist heteropatriarchy?” I sure did.

So they have a long list of demands. And if the school doesn’t meet every one of those demands, this group has promised a “full and forceful response.” They don’t say what that is, probably because they have no clue either. I’m pretty sure it doesn’t include dropping out of a school they just hate.

Some of their demands include recruiting more black students, changing the names of campus buildings to honor black leaders, enrolling more ex-cons, more “safe spaces,” firing at least eight teachers for “racist undertones,” adding “Africa-centric courses” and on and on and on.

It’s lunacy. And here’s the kicker: Oberlin College was one of the first American colleges toregularly admit black and female students. The school was a leader in civil rights for African Americans. These stupid students would have a hard time finding a school with a better record on equality and civil rights than Oberlin.