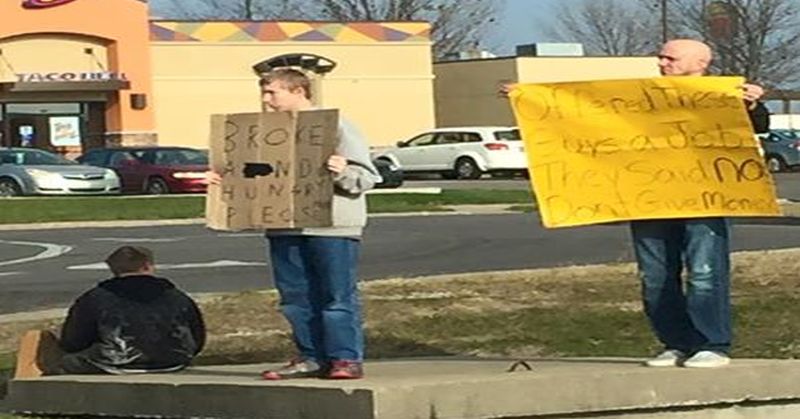 I have fallen on hard times myself as a single mom. I have never had to panhandle for money, but I can imagine my gratitude would be through the roof if someone had offered me a job when I needed it the most. Not so for every panhandler, though.

One man decided that he would do something to help the panhandler out in the best way possible – a job. The man’s nephew chronicled the events afterwards online:

Michael Wooldridge, of Muscatine, Iowa, claimed in a Facebook post that his uncle Mike’s offer was turned down.

“My Uncle Mike offered these guys a job said he was busy right now could use the help they said no so he did this !! Wow don’t give these guys any money,” Wooldridge wrote.

But Uncle Mike didn’t stop there.

Instead, the man apparently made up his own sign and stood directly behind the panhandlers. His sign read: “Offered these guys a job. They said no. Don’t give money.”

My Uncle Mike offered these guys a job said he was busy right now could use the help they said no so he did this !! Wow don’t give these guys any moneyShare Share Share !!

When a Facebook user asked Wooldridge how the panhandlers reacted to the stunt, he said they left — but his uncle followed them to their stop and continued holding his sign.

This is great. I would totally do that to someone.

The real issue here is that there is a problem with laziness in America. Folks simply always want the easiest route possible – and that includes not working. These able bodied young men deserve anything that they got from Uncle Mike. Get a job, kids. I’m not going to support you.