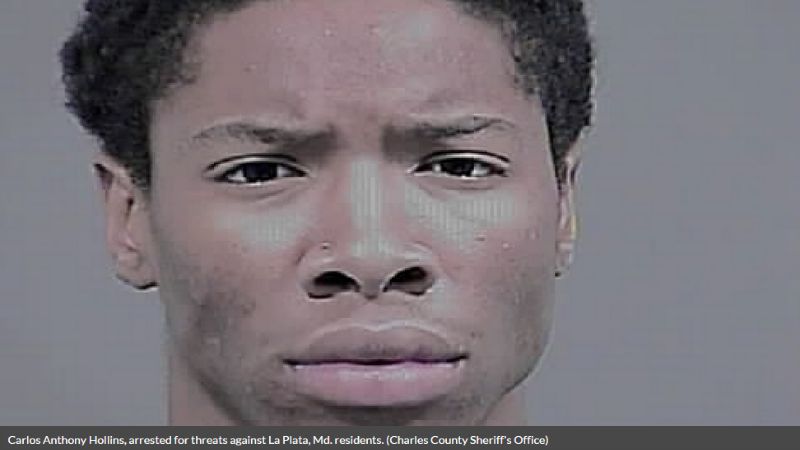 By now you’ve seen the outrageous and violent behavior of some in the ‘Black Lives Matter’ movement.

Not only are they destroying businesses and their own communities but they have threatened anyone who isn’t black and they have celebrated white cops who are killed.

One could even say they are partially responsible for the deaths of the cops that have been killed.

An unknown man on Twitter decided to make the claim that he wanted to ‘Purge’ and ‘Kill all the White People’ in his home town of La Plata.

The La Plata Police Department decided to put more officers on the street after Hollins’ arrest, according to NBC Washington.

Carlos Anthony Hollins, 20, of Waldorf, Maryland, has been charged with threats of mass violence for allegedly sending a tweet Wednesday afternoon that read:

IM NOT GONNA STAND FOR THIS NO. MORE. TONIGHT WE PURGE ! KILL ALL THE WHITE PPL IN THE TOWN OF LAPLATA. #BLACKLIVESMATTER

Maybe now he’ll see how much ‘Black Lives Matter’ as he works his way through the court system where many claim there is injustice against black men.

What’s disturbing is the police believe that others may follow suit and actual act on Hollins’ threat.

Why is that disturbing? Because this country has an epidemic of black mob violence that no one wants to talk about. And it didn’t stem from Ferguson or Baltimore, it’s been going on for several years.

The Black Lives Matter crowd is doing nothing but turning themselves into a sub-culture of domestic terrorists.