Over the past several years West Virginia Senator Joe Manchin has steered millions of dollars to organizations his wife Gayle Manchin has been involved with according to a new report from Fox News:

“The West Virginia lawmaker has helped ensure funding reached at least three organizations where his wife worked at the time, and another group that indirectly benefited a fourth organization linked to his wife. As a moderate, Manchin – a member of the Senate Appropriations Committee that oversees federal discretionary spending bills – has taken a leading role on key Democratic legislative priorities since President Biden took office.

One of the larger examples of Manchin’s ability to boost funding for projects involving his wife is the Appalachian Regional Commission (ARC), a federal-state partnership dedicated to boosting Appalachian region economies. The White House appointed Gayle Manchin in April 2021 to be the federal co-chair of ARC.

While the bipartisan commission has received annual funding of roughly $165 million to $200 million from Congress since 2019, it received a staggering $1 billion in late 2021 under the Bipartisan Infrastructure Law, which Sen. Manchin had co-sponsored and championed. After the Senate passed the legislation, Manchin celebrated the billions of dollars that would be sent to West Virginia-based initiatives, but didn’t mention the ARC funding.”

Who is surprised by this?

While no one has an issue with a Senator or Congressman sending money to his or her district, the issue is doing it in a way that directly benefits a family member or friend.

This may help in part to explain why Senator Joe Manchin is becoming so unpopular in his home state of West Virginia. Townhall reports on Manchin’s fading poll numbers:

A new poll out this week shows things haven’t improved as time has passed, calling into question Manchin’s re-election chances in 2024.

While Manchin’s approval rating back home continues to suffer, the Senator spent time this week in Davos, Switzerland at the World Economic Forum.”

Who could have ever predicted Joe Manchin’s poll numbers would fall after selling out the people of his state?

I’m also guessing that Manchin’s presence at Davos and his anti-free speech comments were also not appreciated by West Virginia voters:

“The problem that we have is the open press system and basically all the platforms,” Manchin said. “So if you’re able to have five platforms, social platforms that you can basically personify the extremes, somebody who is extremely right or extremely left, and it seems like that is the majority speaking, they’re not the majority, but they’re basically driving everybody to make a decision. What side are you on? Are you on this side or this side? And in America, there’s only one side, the American side. There is not the Republican side or Democrat, we should be coming together to solve the problems from a different angle.”

After an outcry Manchin later was forced to apologize and walk back those remarks but by then the damage had already been done as we all know he really meant what he initially said.

Democrats and most elites hate free speech and a media that does not comply with the ruling class narrative on virtually any subject.

Lets hope that the polling trend continues and Manchin is thrown out of office by voters after the next election.

The only way Manchin could still win re-election, given that the leaders of both parties want him gone, is if Republicans screw things up which is not outside the realm of possibilities. 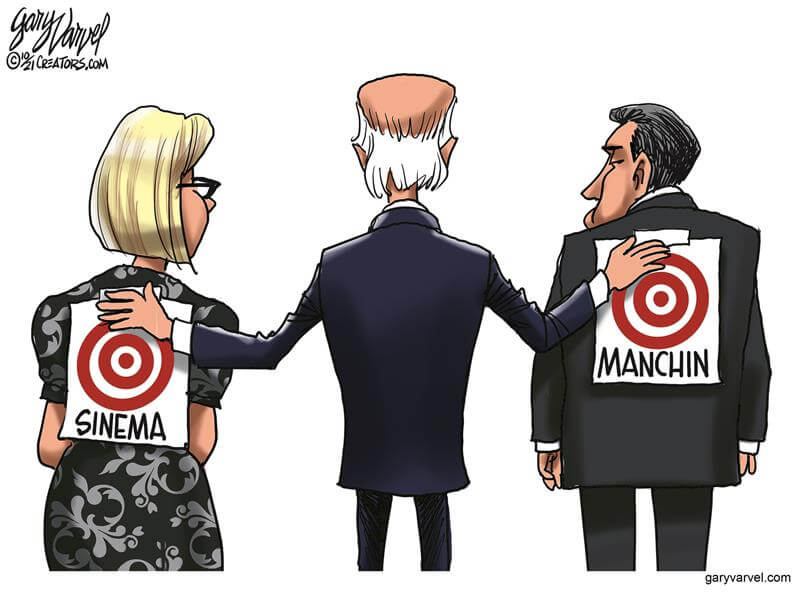