Visual Capitalist has published a map of the largest employers in each U.S. state, revealing a largely “Walmart Nation.”

Universities disturb the trend. California, Hawaii, Nebraska, Iowa, Wisconsin, Michigan, New York, and Vermont all have a university as their largest employer.

Health services such as Mayo clinic are also represented in a small handful of states.

Yet the majority of states see a single employer occupying the largest chunk of the job market: Walmart.

“In an era where Amazon steals most of the headlines,” Visual Capitalist reports, “it’s easy to forget about brick-and-mortar retailers like Walmart.”

The map, however, doesn’t remind us of “brick-and-mortar retailers like Walmart.” It reminds us of just one store, and that’s Walmart. 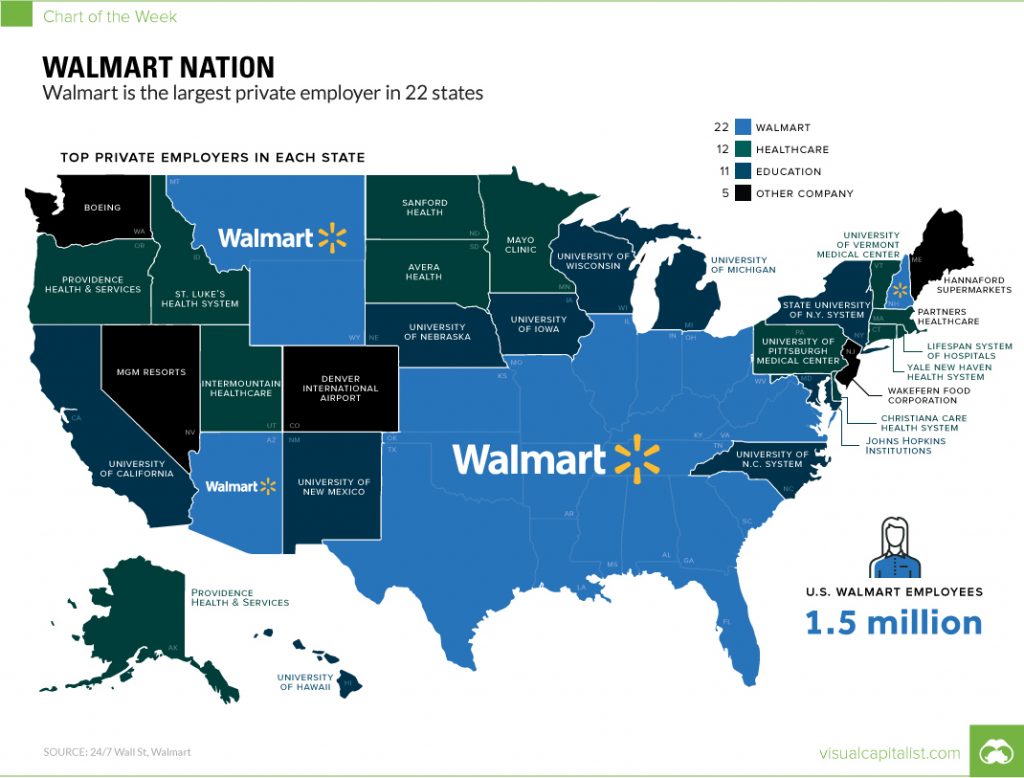 But, even though the market values the Bezos e-commerce juggernaut [Amazon] at about twice the sum of Walmart, the blue big-box store is very formidable in other ways. For example, revenue and earnings are two areas where Walmart still reigns supreme, and the stock just hit all-time highs yesterday on an earnings beat.

That’s not all, though. As today’s map shows, Walmart is dominant in one other notable way: the company is the biggest private employer in America in a whopping 22 states.

Using data from 24/7 Wall Street, we mapped out the largest employer (excluding public administrative bodies, such as state governments) in each state.

The map lists 22 states where Walmart is the biggest employer. It breaks up the rest of the country into general fields of employers, with healthcare leading in twelve states, education leading in 11, and “other company” leading in just five.

Walmart doesn’t need a generalization to drown the map in blue. It stands alone in its own right.

According to the map, Walmart boasts 1 and a half million employees.

Walmart represents the largest employer through nearly every southern state, and much of the Midwest.

Yet Walmart’s website boasts  58,525 employees in North Carolina. That’s not far behind the 74,079 worker employed by North Carolina University.

As Walmart continues to grow, it could very well seize additional states. “Other businesses” just can’t compete in terms of sheer number of job opportunities.

Meanwhile, Amazon is noticeably absent. They didn’t take the lead in a single state.

In case you may be wondering, Amazon is not the largest employer in any state – even in the company’s home state of Washington, where it still lags behind Boeing.

However, Amazon’s epic ramp-up is quickly taking over Seattle, and the company now has as much office space there as the city’s next 40 biggest employers combined.

And who knows, with over 238 bids for Amazon’s new HQ2, it’s possible that the company could be adding up to 50,000 new jobs in another state very soon.

The map certainly is telling about the American job crisis. Yes, Americans can still find work. But Walmart seems to be the best option for far too many. The store can brag about being the largest employer in so many states, but their reputation seems to stop there.