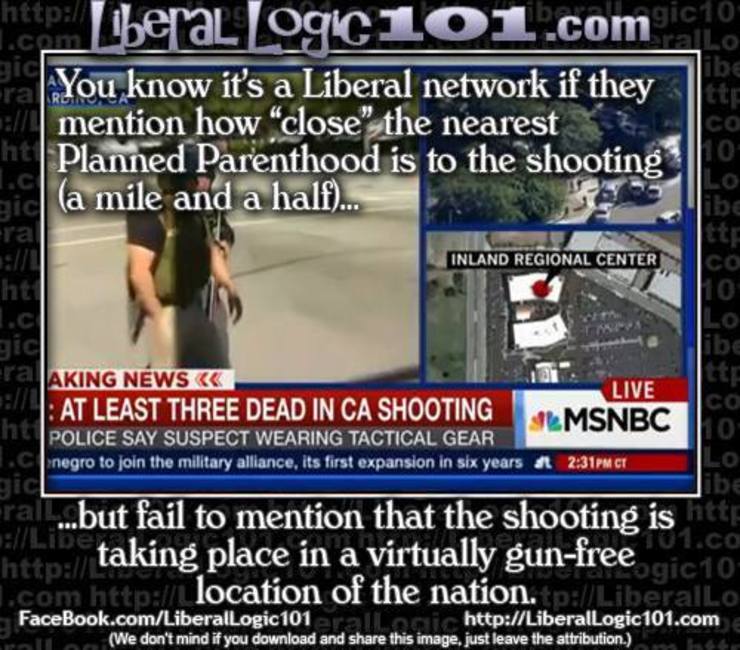 Right after the terribly tragic mass shooting that occurred Wednesday at a San Bernardino, California facility for people with development disorders, naturally, the media jumped on it to quickly report all of the emerging details.

However, MSNBC for one, is making sure that the public is aware of what’s really important:

Well then, thank you so much for paying attention to that instead of the 14 people who just got gunned down in a non-abortion providing facility for people with

How kind of you, MSNBC.

Twitter users were quick to retaliate to agenda-driven hiccup in providing information that actually relates to the mass shooting at hand:

Good to know since it’s a mile and a half away from the scene https://t.co/yuXneoX8NV

And because I know people will ask, the closest PP is just over a mile away from the active San Bernadino shooter pic.twitter.com/T1bQllO0vJ

@jbendery what does this have to do with anything.

Nothing. Everyone is agreeing that this has nothing to do with anything.

Who cares about actual victims when you can manufacture victims in Planned Parenthood?

@jbendery @mooshakins MSNBC reporting on all the other places unaffected, or just Planned Parenthood?

How about the hospital, college, middle school, elementary school, or mall — all within a 10 minute drive radius? https://t.co/sdakvVGyao

Yes, got to make sure Planned Parenthood is unaffected, @msnbc. Don’t want any interruptions to the profitable abortion Industry.

Oh, but HuffPo’s Jennifer Bendery, who tweeted about MSNBC saying Planned Parenthood was ok, doesn’t like how some people are reacting:

An incredible level of anti-Planned Parenthood rhetoric from Twitter commenters right now. In the middle of another shooting. Please stop.

Hey Jenn, maybe you’re the one who needs to stop. You’re right, we were in the middle of another shooting. Can you do some real journalism and report on the one that just happened?

Oops, I guess not…

Speaking of shootings — the guy who shot up Planned Parenthood last wk has history of violence toward women https://t.co/ZNsRo5apl8

It’s been four days since shootings at Planned Parenthood. Worth looking into. https://t.co/j7UKoJAabp

Give it a rest for a while, will you? Please?