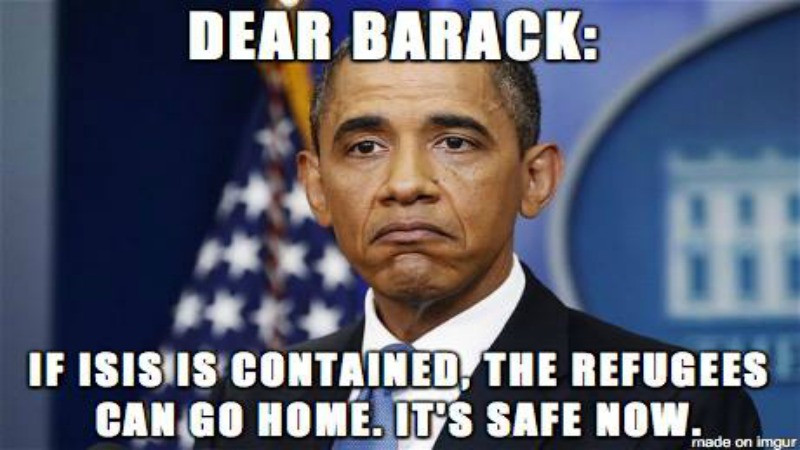 Just a day before the horrifying Paris Attacks by Islamic Extremists, Obama made the claim that ISIS is ‘contained.’

This is a man who is supposed to be in National Security meetings on a daily basis. Is he skipping these meetings?

How is it that regular Americans seem to know ISIS is gaining strength but the Commander-in-Chief of the United States of America doesn’t?

Obama declared in an interview that ISIS had been “contained,” asserting that the terror cell had been stalled in Iraq and Syria.

The next day, ISIS claimed responsibility for one of the worst terror attacks in European history, shattering what had been a growing sense of momentum in the global fight against extremists and driving home the frightening ability of ISIS to inspire and possibly coordinate attacks outside their power base in Iraq and in Syria.

The stated goal of the U.S. had been to decapitate ISIS, but the group, claiming credit for the attacks in Paris, has shown that containment and decapitation clearly don’t work against an organization that courts death and is atomized to the point individuals or small groups can act largely on their own. ISIS has quickly matured during the Obama administration from a group the President once called al Qaeda’s “JV team” to a terrifying threat to the West. It’s a threat the U.S. and Europe clearly do not yet fully understand.

Before the attack, Obama spoke reassuringly about the growth of ISIS in the MIddle East, suggesting that while the terror group had not been beaten, it had been controlled.

“We have not yet been able to … completely decapitate their command and control structures,” he told ABC News. But he touted success in “trying to reduce the flow of foreign fighters.”

The administration says when he declared ISIS contained, Obama was speaking only about efforts to help Iraqi and Kurdish forces and U.S. bombing efforts in Syria.

Here’s the video of his statements:

As the meme says, if ISIS is ‘contained’, there’s no need to be bringing Syrian refugees, potential Islamic Extremists, into the United States right?

And if Obama says they are “trying to reduce the flow of foreign fighters” they why would he FREELY open the borders to Syrian refugees who could potentially be Islamic extremists?

One of the Paris Attackers was a refugee who allegedly had a Syrian passport. Clearly France is not  Syria. Clearly this was a foreign fighter who flowed into Europe.

The Obama Administration can’t even manage illegal aliens coming over our Mexican borders as it is and they are somehow going to properly vet thousands of Syrian refugees?

Once again Obama comes of as the most clueless head of any state in modern-day history. Of course, he’s not. Obama knows exactly what’s going on. His ‘dimwitted’ commentary is simply part of the show.