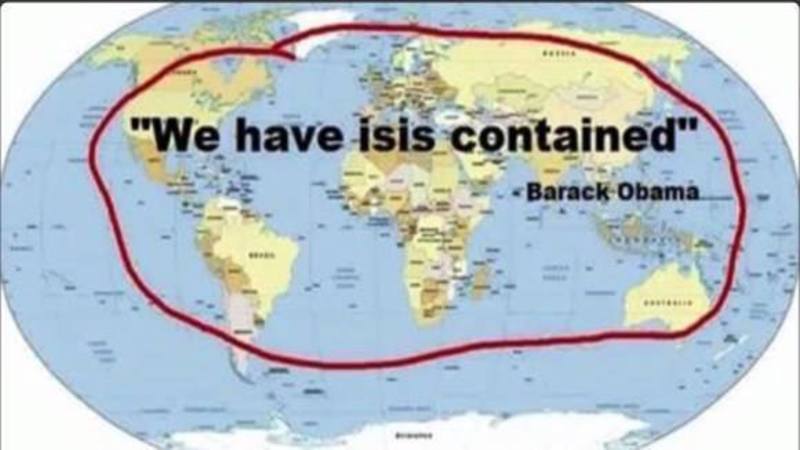 Earlier this year, while President Obama still considered ISIS to be a junior varsity team, he said the greatest threat to humanity was global warming.

At Saturday night’s Democratic debate, Bernie Sanders reaffirmed that global warming was the greatest threat to humanity and was also the root cause of terrorism in the Middle East. Meanwhile, Martin O’Malley said he still wanted to bring 60,000 Syrian refugees into this country, though we now know some of those refugees were involved in the Paris attack.

The White House Deputy National Security Advisor says the importation of refugees will go ahead as planned.

Then there is Hillary Clinton. As John Podhoretz noted Sunday, the former Secretary of State’s policy solutions amount to a jumble of contradictory platitudes:

We must “root out” ISIS, she said, and implicitly criticized Obama when she said it “cannot be contained, it must be defeated.” At the same time, she said, “it cannot be an American fight.” However, “American leadership is essential.” And yet, she said, “I don’t think that the United States has the bulk of the responsibility.”

Instead, and breathtakingly, she suggests the person who must take the lead is Syria’s dictator, himself responsible for the slaughter of hundreds of thousands of his own people and the progenitor of the refugee crisis that is turning Europe inside out: “I really put that on [President Bashar] Assad and on the Iraqis and on the region itself.”

These are children and we need grownups.

The Republican Party rarely wins domestic policy elections. But when it comes to foreign policy, it turns out the American people want someone in the White House who is willing to kill bad guys while suffering no delusions. The Democrats are infantile and delusional. They have reached a point where no evidence contrary to their world view will ever be allowed to pierce their bubble and get them to change their ways.

Barack Obama and the Democrats have no intention of protecting us or killing ISIS. They instead want to wreck our economy with global warming regulations. They think if we wind up having to become powerless tent dwellers like ISIS, maybe then they’ll leave us alone.