The White House proudly announced that they have “commuted the sentences of 248 individuals – more than the last six presidents combined.”

For most administrations, it’s not a number to be pleased with … it might even be shameful, but they announced it just like that. They couldn’t be happier. Here’s their first paragraph: 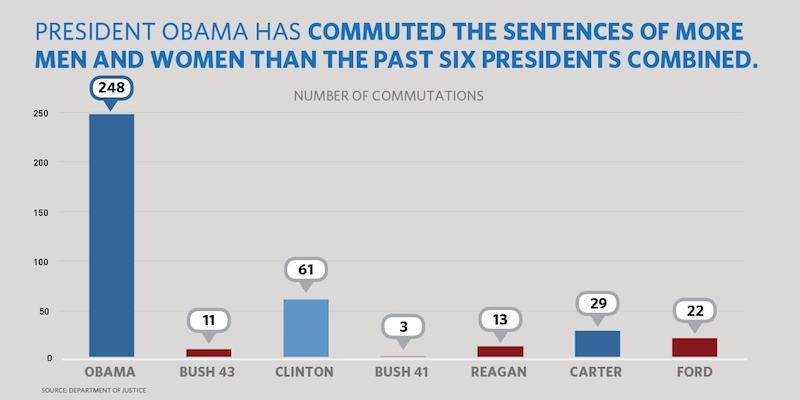 Perhaps our sentencing guidelines – especially for drug offense are too harsh – perhaps. But does the President need to gloat about being the most pardon-happy president in modern times? Does he need to be so happy about it?

There are probably many more commutations to go, as he still has 10 months left. Obama’s 248 dwarfs the last six presidents. President Clinton had 61 commutations and Obama is more than four times that. From Obama’s announcement:

Despite the progress we have made, it is important to remember that clemency is nearly always a tool of last resort that can help specific individuals, but does nothing to make our criminal justice system on the whole more fair and just. Clemency of individual cases alone cannot fix decades of overly punitive sentencing policies. So while we continue to work to resolve as many clemency applications as possible – and make no mistake, we are working hard at this – only broader criminal justice reform can truly bring justice to the many thousands of people behind bars serving unduly harsh and outdated sentences.

Fortunately, we are at a unique moment in history where such reform is possible. For the first time in a quarter century, Americans across the board acknowledge that the criminal justice system is broken and needs to change. This is no longer a partisan issue: Republicans and Democrats agree that many sentencing laws are outdated and unnecessarily harsh. We are continuing to work in bipartisan fashion to secure those much-needed, long-overdue reforms in Congress so that thousands more deserving individuals may benefit from the second-chance that these individuals earned today.