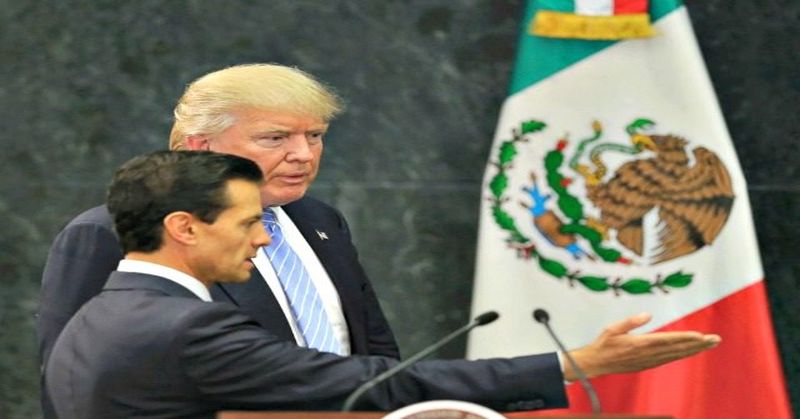 Mexico’s President, Enrique Peña Nieto, was one of the first world leaders to congratulate President Elect Donald Trump on his victory.

Pena Nieto has formally reached out to the US President Elect to invite him down to Mexico to negotiate construction of the Wall.

Mexico is very worried that President Trump will actually follow through on his promises to conduct massive deportations, to apply new trade tariffs and to demand renegotiation of the North American Free Trade Agreement. Pena Nieto’s invitation for Trump to make an official Mexican visit in August now seems brilliant.

The Mexican government promised to intervene in currency markets to prevent any disruptive fall in the peso from the U.S. elections. But Mexico’s financial markets have been hammered since Election Day, with their peso currency crashing by 13 percent. …

Mexico has huge risk in a trade war with President Donald Trump and the United States. About 90 percent of U.S.-based fortune 500 companies now have made substantial investments in Mexico. According to the U.S. Bureau of Economic Analysis’ report from 2012, U.S. multinational enterprises employed 1,106,700 people in Mexico, but Mexican companies only employ 68,800 in the United States.

But NAFTA has been so remarkably successful that Mexico, with $400 billion in exports, is now the 12th largest export economy in the world. That has only been possible because 80 percent of Mexico’s exports go to the United States. …

The outreach seems to indicates that Mexico values its relationship with the U.S. and will be “flexible” in negotiations to maintain it.

Trump has a great deal of leverage to employ when negotiating his proposed border wall.

Mexico benefits greatly from a smooth trade relationship with the U.S., and Pena Nieto has made it very clear that he’s ready to work with Trump.