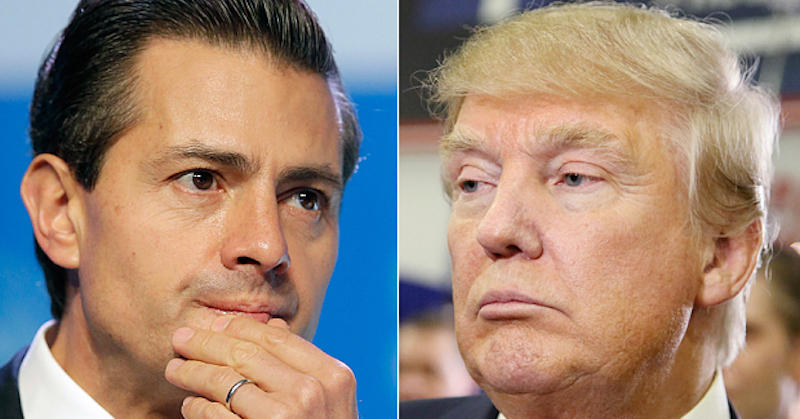 But the goodwill quickly disappeared as a stubborn-looking Enrique Pena Nieto told reporters after the meeting that Trump’s “anti-Mexican” campaign rhetoric was a “huge threat” to his country.

“His policy stances could represent a huge threat to Mexico, and I am not prepared to keep my arms crossed and do nothing,” Pena Nieto said, according to Reuters. “That risk, that threat, must be confronted. I told him that is not the way to build a mutually beneficial relationship for both nations.”

Let’s not forget that Pena Nieto had previously likened Trump to Benito Mussolini and Hitler for his positions on immigration. This would give the average American the impression that Mexico’s immigration laws are less strict and looser than Trump is proposing.

So let’s take a look at Mexico’s immigration rules and restrictions:

Mexican law requires that all immigrants are:

in the country legally;

have the means to sustain themselves economically;

not destined to be burdens on society;

of economic and social benefit to society;

of good character and have no criminal records; and

contributors to the general well-being of the nation.

The law also ensures that:

immigration authorities have a record of each foreign visitor;

foreign visitors do not violate their visa status;

foreign visitors are banned from interfering in the country’s internal politics;

foreign visitors who enter under false pretenses are imprisoned or deported;

foreign visitors violating the terms of their entry are imprisoned or deported;

those who aid in illegal immigration will be sent to prison.

Mexico welcomes only foreigners who will be useful to Mexican society:

Foreigners are admitted into Mexico “according to their possibilities of contributing to national progress.” (Article 32)

Immigration officials must “ensure” that “immigrants will be useful elements for the country and that they have the necessary funds for their sustenance” and for their dependents. (Article 34)

Foreigners may be barred from the country if their presence upsets “the equilibrium of the national demographics,” when foreigners are deemed detrimental to “economic or national interests,” when they do not behave like good citizens in their own country, when they have broken Mexican laws, and when “they are not found to be physically or mentally healthy.” (Article 37)

The Secretary of Governance may “suspend or prohibit the admission of foreigners when he determines it to be in the national interest.”

Sounds a lot like what Donald Trump is proposing, doesn’t it?

Under Mexican law, illegal immigration is a felony:

“A penalty of up to two years in prison and a fine of three hundred to five thousand pesos will be imposed on the foreigner who enters the country illegally.” (Article 123)

Foreigners with legal immigration problems may be deported from Mexico instead of being imprisoned. (Article 125)

Foreigners who “attempt against national sovereignty or security” will be deported. (Article 126)

So anybody concerned about how harsh and punitive Donald Trump wants our immigration laws to be should only look to Mexico for a textbook example of what he’s looking to do.