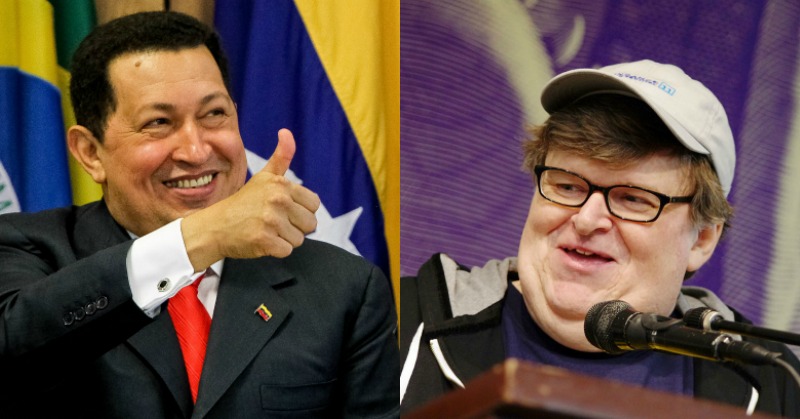 In a display of the type of propaganda that brutal dictators would certainly approve of, perpetual moron Michael Moore posted an absurdly ignorant tweet in praise of Hugo Chavez’s socialism.

Wow, in Moore’s revisionist history world Venezuela sounds like a fantasy land — and Moore’s tale is just that, fantasy, although a more dangerous kind because the reality he is covering up is being endured by millions of people in the South American country.

Twitter quickly took Moore to task for his tweet, which came from either sheer stupidity or a desire to glamorize the hell that Chavez’s socialism brought to Venezuela (or both).

@mmflint Really? I guess you don't like 'civil liberties' and enjoy shortages of food. THAT'S #HugoChavezLegacy

@MMFlint Hey Mike, can you explain how Chavez died richer than Mitt Romney? Because I can't quite figure that one out.

@MMFlint We knew you wouldn't disappoint us, you communist.

Gotta love Chavez and all the abundance he created in his grocery stores @MMFlint pic.twitter.com/kBjzh8EIXX

Sir, have you ever been in Venezuela? There is no milk 🍼 for babies 👶🏻 not even diapers @MMFlint people are eating garbage. Are you insane?

My in-laws and their employees lived in fear of his benevolent govt. nationalizing their business. Such a great guy…

Maybe Moore’s looking for a diet plan after some failed New Year’s resolutions?

Rich elitists love to glorify socialism for a variety of reasons. Often, they aren’t the brightest bulbs in the box and have a childish view that everyone can have all the things that they have — without them giving up anything — and everything will be sunshine and roses once the government steps in and redistributes resources.

Others that are a skosh smarter get that resources are limited but think that they will end up as part of the small group of elites that have plenty while the rest of the people suffer. If they took a moment to study history — even a little bit — they would know that their socialist utopia scenario isn’t going to end well for them.

No matter which camp Moore falls into, both evidence that the regressive left is dangerous whether they get there via stupidity or not.