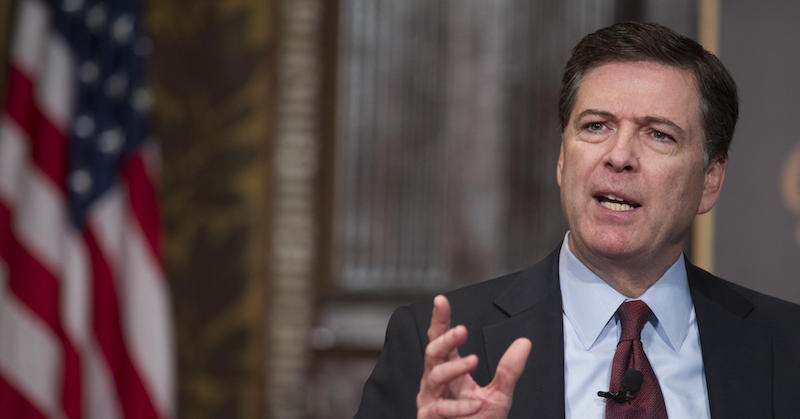 The FBI’s James Comey is complicit in the Clinton email scandal, no longer enjoys the “special trust and confidence” of the American people and needs to step down.

These are the chilling words of former Military Intelligence officer and Judicial Watch official Chris Farrell. He writes in The Hill that Comey – after detailing all of Hillary Clinton’s alleged criminal wrongdoing, he still decided to recommend against prosecution.

Unbelievably, having defined the elements of a national security crime and given specific examples of Mrs. Clinton’s reckless, dangerous conduct in each case, Mr. Comey concluded that “no charges are appropriate in this case” and that “no reasonable prosecutor would bring such a case.” Mr. Comey did not tell the truth.  Many people, in and out of government, know Mr. Comey’s blatant falsehood.

Farrell then describes a case involving a “mere fraction” of the crimes that Hillary Clinton was involved in. Bryan H. Nishimura, a Navy reservist in Sacramento, pled guilty to Unauthorized Removal and Retention of Classified Materials. He was sentenced to two years probation and given a $7,500 fine. He also lost his security clearance.

The public’s faith in the fair administration of justice was damaged by Attorney General Lynch’s meeting with President Clinton on the tarmac in Phoenix. It was further damaged by the apparent sweetheart “voluntary interview” of Mrs. Clinton by the FBI on the Saturday of the July 4th weekend.

Then just over 48 hours later (no doubt Mr. Comey spent the weekend carefully examining a year’s worth of interview transcripts), the proverbial stake was driven through the heart of any remaining faith and confidence in the public’s concept of “equal justice under law” or in Mr. Comey’s professional integrity by his nonsensical, contradictory, and insulting decision to let Mrs. Clinton “walk” on her national security crimes. No other federal government employee would have received the extraordinary, exceptional treatment Mr. Comey conferred on Mrs. Clinton.

Career diplomats, prosecutors and government employees with security clearances and access to classified information are shaking their heads in disgust, Farrell writes: “They now know the truth. No other cabinet secretary has ever broken the law so flagrantly or endangered national security so gravely. Mr. Comey is now complicit in Mrs. Clinton’s reckless conduct. Mr. Comey knowingly gave Mrs. Clinton a “pass.” He is compromised.”