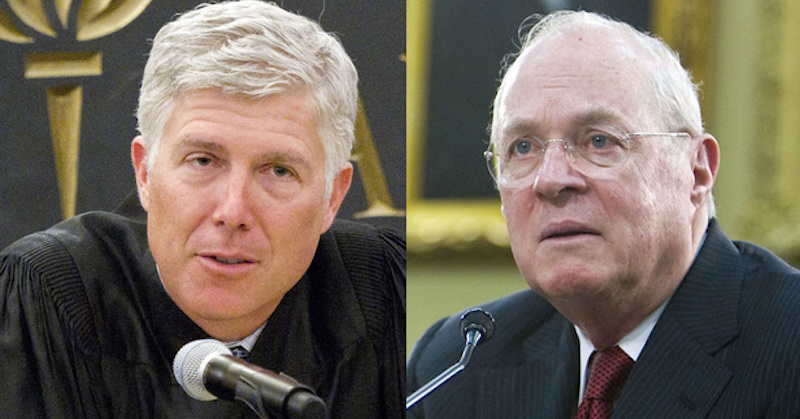 The Trump administration has already moved past Neil Gorsuch and are looking ahead.

The president has made his selection to for the Supreme Court seat vacated when Antonin Scalia passed away and he’s counting on Republicans in the senate to get it through no matter what.

With that behind him, Trump has done what he said: appoint a conservative judge in the mold of Scalia.

Now, they’re looking at a second Supreme Court vacancy. And it might be Justice Anthony Kennedy.

Gorsuch clerked for Kennedy and admires him greatly. There are rumors that when Gorsuch takes the bench, the 80-year-old Kennedy might retire, The National Review is reporting.

The New York Times goes so far as to suggest that Trump’s selection of Gorsuch is a signal to “show Kennedy that should he step down at some point, Trump would select as his replacement a nominee similar to Judge Gorsuch and not one so inflammatory or outside the mainstream as to be unacceptable to Justice Kennedy.”

Kennedy is a conservative, but he has often been the deciding vote in a four-four tie in the Supreme Court. Having someone even remotely more conservative replace Kennedy would secure a 5-4 conservative split on the court for decades to come.

Former Supreme Court clerks almost never speak for attribution when it comes to discussion of their former bosses, especially regarding their retirement plans. Nonetheless, a few have provided background information since Gorsuch’s name floated to the top of the Trump appointment list. “Those who know Kennedy wouldn’t at all be surprised if he retired this June. He is at the apex of a 29-year-career on the Court and has made his mark,” one former clerk told me. “In addition, it’s no secret that at age 80 he is slowing down a bit and I’d say it’s more likely than not he will leave at the end of this year’s term in June.”

Other clerks agree. “I would put it at 50–50 that he leaves at the end of the term,” a former Kennedy clerk told the Washington Post. Senator Orrin Hatch, a former chairman of the Judiciary Committee, agrees that the Gorsuch appointment might convince Kennedy that his successor on the Court will be someone he respects. “He might feel like it’s time to retire, too, because he’s talked about that a few times,” Hatch told the New York Times.

The consensus seems to be that if Justice Kennedy retires, Trump might likely look to a woman to take the seat. “A vacancy created by Kennedy would be fraught with symbolism that the Court could really move in a more conservative direction,” one aide said. “Democrats will be under enormous pressure from their base to fight the Trump nominee to the death. A highly qualified woman with a compelling life story would help.”

Perhaps, so courtesy of National Review, let’s take a look at the women who were on Trump’s list of possible Supreme Court Justices:

Allison Eid, 51. Eid is a former clerk to Supreme Court Justice Clarence Thomas and belonged to the conservative Federalist Society during law school. Since she joined the Colorado Supreme Court in 2006, she has written decisions seen as supportive of school vouchers, Second Amendment rights, and private property. Ironically, her stirring dissent in a case involving eminent-domain powers of government puts her on the opposite side of Trump, who has long championed government’s right to take private land. Like Gorsuch, she is from Colorado, and Trump might pause before appointing two people from the same state during his first term.

Joan Larsen, 48. A member of Michigan’s supreme court, Larsen has a strong résumé that includes service as a deputy assistant attorney general at the U.S. Justice Department and a law clerkship with the late Justice Scalia. She taught law for a decade at the University of Michigan. One part of her record may argue against her appointment: She joined the Michigan supreme court in October 2015 and would have less than two years on the bench should a vacancy on the high court open up this year.

Margaret Ryan, 52. She has been a judge on the U.S. Court of Appeals for the Armed Forces since 2006 and has a background likely to appeal to an out-of-the-box thinker like Trump. Before becoming a judge, she served in the Marine Corps during the Gulf War as a staff officer and as both a company and a platoon commander. A graduate of Notre Dame Law School, Ryan served as a military lawyer for four years and clerked for conservative icon Judge J. Michael Luttig of the Fourth Circuit Court of Appeals. Ryan would find favor with conservatives but could expect flak from liberals, who already carp that Trump appointments too often go to those with a military background.

Diane Sykes, 59. Sykes has experience at three different levels of the judiciary. Elected a Milwaukee municipal-court judge, she served in the criminal division, where she earned a reputation as tough but fair. She then served as a calming force on the Wisconsin supreme court for four years before being appointed to the Seventh Circuit Court of Appeals by George W. Bush. Almost half of the Democrats in the Senate at the time voted for her confirmation. Sykes is a favorite of conservative legal intellectuals for her vigorous opinions. Her major drawback is that, at 59, she is in the upper age range for a president who wants to make a long-term impact on the Supreme Court’s jurisprudence. The last five appointees — Stephen Breyer, John Roberts, Samuel Alito, Sonia Sotomayor, and Elena Kagan — were no older than 55 at the time they joined the Court.