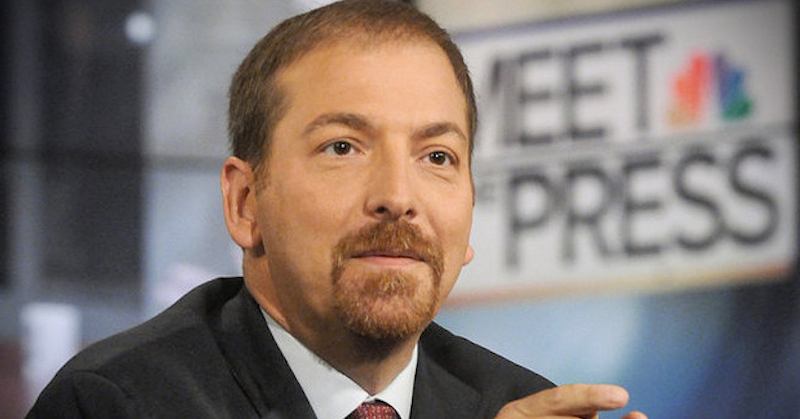 When a CNN National poll showed Donald Trump ahead of Hillary Clinton by two points, it looked pretty good for the Republican nominee.

But thank goodness we had MSNBC to fix the poll to provide us with the correct numbers.

See, Chuck Todd tells us that poll was all wrong. It showed Trump with a two-percent edge over Hillary Clinton with likely voters, 45 to 43 percent, with Libertarian Gary Johnson at 7 percent and Greenie Jill Stein at 2 percent.

But MSNBC didn’t like that poll one bit. So they… “unskewed” it. Here’s Chuck Todd:

“Whites without a college degree appear to make up nearly half of their sample. In 2012, by the way, whites without a college degree was slightly more than a third of all voters,” Todd said. “The point is, your numbers may not be wrong but your weighting may be, your assumptions. So the CNN folks assumed an electorate that is not an impossible scenario for Trump, but it would be an historic shift if it occurred.”

Once Todd fixed the poll, guess what? Hillary Clinton’s two-point deficit turned into a four-point lead, 46 to 42 percent.

Ahh! Great. Thanks, Chuck. For a second there, we were looking at a relatively objective poll that showed Donald Trump ahead.

This is nothing new for the media and their national polls. In late July, Reuters tinkered with their poll results to give Hillary an advantage. This poll-tinkering is so bad, it’s drawing fire from lifelong Democrats.

“They not only changed their formula to put Hillary ahead. They went back and changed the results, for a week of results where Trump was ahead, and then they turned those into Hillary leads,” said Democratic strategist Pat Caddell. “They also erased all the former polling off the site. They didn’t tweak their procedure – they cooked it.”

“Never in my life have I seen a news organization, and a supposedly reputable poll, do something so dishonest,” Caddell continued. “What they have done is, they decided the people who said, ‘oh, I’m never for someone’ – oh, those must be Hillary votes. They used to be Trump voters.”