No matter what the establishment media mob wants you to believe, there’s not even a shred of a chance that former Vice President Joe Biden is in any way, shape or form excited about Tuesday’s upcoming debate with the master and legend of all debates, President Donald Trump.

And if people on the left were totally honest with themselves, they too, know that Biden — who can literally barely string together more than two coherent sentences — will likely be taken behind the proverbial woodshed by the president.

Further proof that Democrats are well aware of that likely outcome, House Speaker Nancy Pelosi dropped a bombshell during a Friday morning interview on CBS’s “This Morning” with host Gayle King, adamantly suggesting that Biden not debate President Trump. But you know, only because Trump is a liar and “not that I don’t think he’ll [Biden] be excellent.”

Here’s the full transcript of Pelosi’s bizarre exchange with King on Friday morning:

KING: “You have to make use of every day, you’re right.”
PELOSI: “No wasted time.”
KING: “Tuesday is a big debate, the first debate between the two of them, between Joe Biden and Donald Trump. You earlier suggested that you didn’t think Biden should debate. Do you still feel that way?”
PELOSI: “I do. Not that I don’t think he’d be excellent, I just think that the President has no fidelity to fact or truth. And actually, in his comments the last few days, no fidelity to the Constitution of the United States. He and his henchmen, with their comments, are a danger to our democracy. So I didn’t want to give him — you know, why bother’ He doesn’t tell the truth, he isn’t committed to our Constitution. But Joe Biden is right, he should —“
KING: “But Speaker Pelosi, that’s what people say is the problem. Your language to some is just as egregious to what they’re saying by calling the President’s people henchmen. Some could say that’s just as insulting as what he’s saying about you.”
PELOSI: “I don’t care what he says about me. Every knock from him is a boost for me. He wants to help me raise money, he can keep knocking me. But I’m speaking truth. Our Constitution is at the mercy of people who have no allegiance to the Constitution of the United States. They have repeatedly demonstrated that. Now that the President has said what he has said —“
KING: “But even the Republicans are coming out and saying there will be a transition to power.”

Watch the video of Pelosi strongly suggesting Biden cancel the debate with Trump in the video below:

To King’s credit, the CBS host reminded Pelosi that comments like calling Trump officials his “henchmen” play a huge role in why Americans generally hate politicians and have virtually zero confidence in their ability to perform their elected job because all they care about is scoring political points in the public eye.

While the presidential debate on Tuesday is one of the most anticipated political events in recent history, make no mistake — between using Covid-19 as a possible excuse and Pelosi seemingly giving Biden permission to bow out by somehow making it Trump’s fault — until the two political giants are on stage and the cameras are rolling, one would be wise to not hold their breath in anticipation. 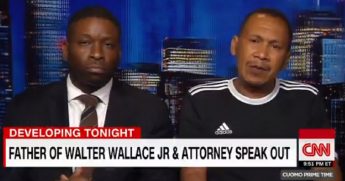