In an act that almost defies belief New Mexico Governor and wanna-be tyrant Michelle Lujan Grisham’s administration has issued a new public health order that allows “essential” businesses including grocery stores to be shut down in certain cases.

In addition, the Governor has reduced the capacity of the stores that remain open to the point that many in New Mexico are being forced to wait in line for hours just to get food and supplies.

A dozen grocery stores around the state have been forced to close for two weeks because of a public health order issued by Gov. Michelle Lujan Grisham at a time when the state’s residents are suffering from record high unemployment and food insecurity, critics say.

The order requires businesses with four or more rapid responses of COVID-19 cases reported within in a 14-day period to close for two weeks.

More than 25 essential businesses were shut down as of Monday afternoon, including a number of grocery stores and major retailers.

Access to purchase food is now limited because of another order issued by the governor requiring capacity limitations at all stores. New Mexicans are now waiting outside, standing in line for up to two hours, local news reports indicate, which the governor’s office has disputed.

The Governor’s office is claiming no one is being forced to stand in line but New Mexico’s GOP chair Steve Pearce has another version of what is actually happening on the ground in New Mexico:

“The governor is dead wrong. The state is forcing people to stand in long lines,” said Republican Party of New Mexico Chairman Steve Pearce. “I, myself, stood in line outside Walmart 40 minutes to get access to groceries. Seniors are also finding it tough during these long waits. Many New Mexicans live in rural areas and can’t travel long distances for food. It’s shameful that the Administration is politicizing this. People are struggling, really hurting now as a result of the governor’s mandate. These lines are real, painful, and it’s remarkable that the Administration has turned a blind eye to them.”

In addition here are images that would seemingly support the fact that some New Mexico residents are waiting in long lines to get food:

@GovMLG you are a liar.

Shutting down essential grocery stores and saying people waiting in line for hours is a GOP talking point. Not only are you a liar, you’re despicable to allow this to happen.https://t.co/ULK9LTtjmi

While many are getting used to the draconian edicts coming from their ever more out of control and tyrannical governors, these new restrictions go far beyond what we have seen so far in other states.

People need to stop acting like sheep and quit being frightened almost literally to death.

The only way this will ever stop is when people refuse to comply any longer, and through their actions tell their elected leaders to go straight to hell.

It’s time to do just that, starting today. 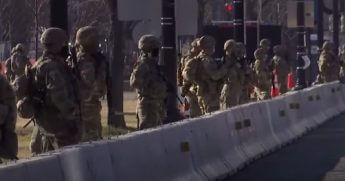