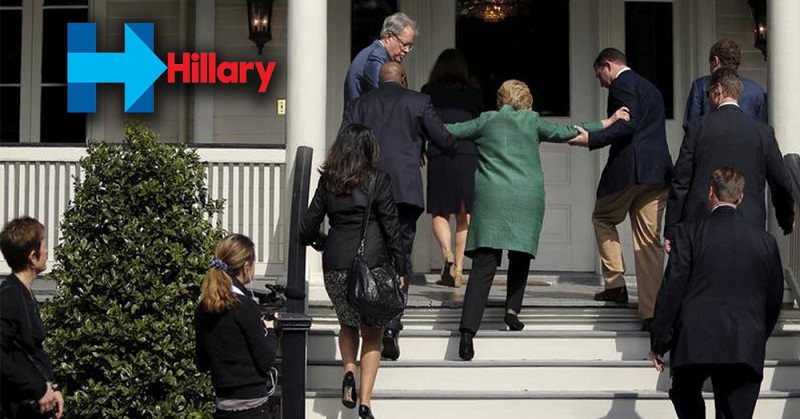 Now it is evident that she needs help to climb stairs.

Reuters and Getty have published multiple photos that reveal 68-year-old Clinton is unable to walk up a short flight of steps without assistance.

For her own health, Hillary should bow out of the presidential race. She can't even walk up stairs w/o assistance. pic.twitter.com/3A1DPTmVoo

The lies must be weighing her down.

Those stairs must be part of a “vast right wing conspiracy.”

Perhaps Clinton’s struggle with ascending up stair is why the press is not allowed to take any pictures of Hillary boarding her private plane. Here you can see Hillary struggle to board an airplane, and then she falls down at the very end of the video.

While accepting her party’s nomination at the Democrat National Convention last week, Clinton noticeably cleared her throat twenty-two times. She appeared to have intentionally timed her throat clearing during the crowd’s applause.

If you observe Clinton’s behavior while in public forums, you’ll also notice an odd mannerism. When she is not speaking, she is nodding, incessantly nodding. Emulating her constant nodding will make you dizzy.

Recall, there was no bigger deal in 2008 than Sen. John McCain’s health. McCain didn’t display odd quirks or an inability to get around on his own. Nonetheless, Democrats religiously claimed the senator was too old to be president.

The questionable health condition of Hillary Clinton has been an ongoing topic of discussion following a concussion she apparently suffered in December 2012 and should be a major issue of the 2016 campaign. The American public deserves to know if she is physically or mentally unstable. Yet, the Democrat Media Complex is ignoring Clinton’s ailments because, at this point what difference does it make?

Politics aside, a President’s health is a matter of national security. We need a strong healthy leader.

Energywise, Donald Trump looks like a college kid next to this old woman.

UPDATE: The photos of Hillary struggling to climb a flight of stairs are six months old.