After the absolutely devastating news of the Sutherland Springs church shooting on November 5, 2017, where 26 were killed and 20 injured by shooter Devin Patrick Kelley during worship service, one New York church is warning potential shooters that they are NOT a gun-free zone. 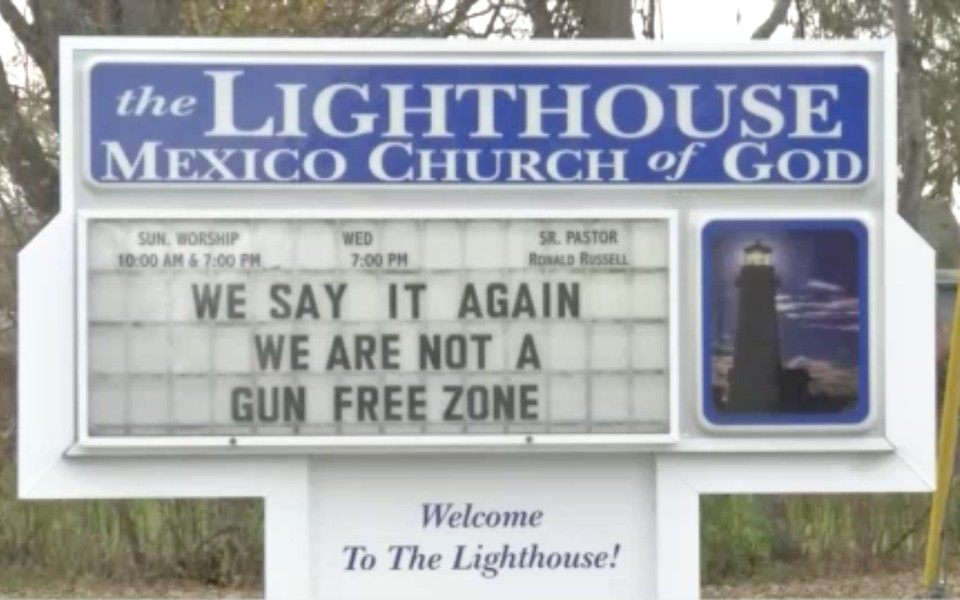 According to Conservative Tribune:

A New York church is warning potential shooters not to mess with the congregation after it posted a sign which reads, “We are not gun free zone.”

According to Syracuse.com, Lighthouse Mexico Church of God in Oswego County posted the sign in light of the recent fatal church shootings in Tennessee and Texas.

But the church’s pastor has already allowed his congregants to open carry within the church for about two years.

Pastor Ronald Russell says the church has had an open carry policy since 2015, when white supremacist Dylann Roof killed nine black church members at a church in Charleston, South Carolina.

“People say ‘well, pastor, you’re talking about killing some,’ and I say ‘well, if I don’t protect my people, I’m being complicit.’ A shooting here, that’s not going to happen,” Russell told Spectrum News.

Even church members agree that they must be proactive, especially after the recent church shootings.

“We have to take the precautions necessary so that we can come and still be able to glorify our God and be safe at the same time,” a church member told KSAT-TV.

This is not unique to New York.

There are congregations around the United States who have changed their opinions on gun-free zones after the deadly church shootings in South Carolina, Tennessee, and most recently Texas.

The governor of Mississippi, for example, signed a bill into law that “opened the door for certain churchgoers to arm themselves and protect their places of worship from the likes of Dylann Roof, the crazed maniac who shot up a church in South Carolina last summer.”

This last April, according to another piece from Conservative Tribune, Mississippi passed the Church Protection Act:

Once chosen by their congregation and then trained in proper firearm use, these church members can then legally carry a weapon with them while at the house of worship.

Finally, churchgoers will not worship like sitting ducks, waiting for unbalanced psychopaths to fire up their place of worship with semi-automatic weapons.

Sadly, not all states have passed the same measures.

I agree that some reform needs to take place with gun control–but I do not believe that means withholding protection from the individuals that need it most in the places they are the most vulnerable.

All “gun-free zone” signs do is advertise to shooters where they can go without fear of a fight.