The Los Angeles Chargers are taking criticism for using a three-year-old photo of soldiers holding an American flag and a Chargers flag, but cropping out a soldier to delete the “San Diego” segment of the Chargers flag.

The original photo was taken in 2014 and features a group of eleven soldiers in Afghanistan standing in front of their service vehicles holding an American flag, and a San Diego Chargers flag. Back in 2014, the team was still in San Diego, but the team moved to Los Angeles in 2016. 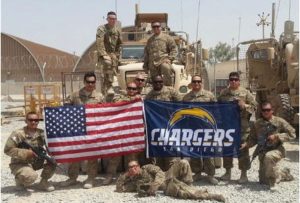 The photo, before cropping.

The photo was taken in Afghanistan in 2014 and is owned by “die-hard” Chargers fan and retired Army Sgt. First Class Johnny Case. It was originally posted to social media back in 2014. But, as part of its “Salute to Service” campaign, the Chargers picked up the photo this week and used it to illustrate the team’s support of our military.

Unfortunately, since they have moved to Los Angeles, the Charges felt the need to do something with the photo to delete the problematic connection to San Diego. So, the team cropped out the whole bottom of the photo ending the picture just under the word “Chargers.” This bit of manipulation ended up cropping out the bottom of the American flag, and, more vexing for the troops, removing one of the soldiers who was in the original photo.

As soon as the Chargers tweet hit the Internet, complaints streamed in from those who were aware of the original photo.

Sgt. Case, who is also a Chargers season ticket holder, was very unhappy that the team used his photo and cropped it the way they did.

“For them to do that to my picture, and not even ask, to crop out one of our guys … it was like, ‘Wow, of course they’re going to do that,’” Case told the San Diego Tribune. “They have this spite for San Diego. But it’s not about San Diego. It’s a soldier. It’s Veterans Day. You cropped out a veteran.”

Case added, “I was (mad), but I guess social media had my back and took it over for me.”

“People are saying, ‘You should sue Dean Spanos,’” Case added with a laugh. “I wish. I’d bring the team right back to San Diego.”

The background on the photo: Case was on his fourth tour of duty (two in Afghanistan and two in Iraq) when he gathered his buddies — many of whom were from Camp Pendleton — to take the photo. They posed in front of the gun trucks they used to escort convoys.

“I felt it was disrespectful of them to crop me out, but I’m more upset about them cropping out the bottom of the flags,” Tran told the media. “Everyone in that picture supported the San Diego Chargers. I grew up watching the team and I supported them whether they won or lost.”

A team spokesman agreed that the photo was handled poorly and “should not have been cropped.”

The team insisted that they “have a long history of supporting service members and their families,” and went on to list some of the campaigns and organizations they support, including serving a Thanksgiving meal to hundreds of Marines at Camp Pendleton.

How do you think the Chargers should have handled the situation? Let us know your thoughts in the comments below!