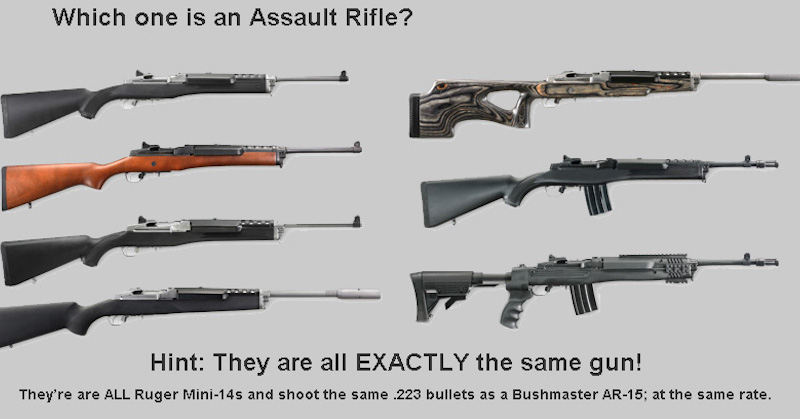 Democrats in Michigan have introduced a sweeping gun control measure in the State House just two months before their annual session ends.

With the ubiquitous but idiotic term “assault weapons ban,” the bill would ban the sale of most semi-auto or pump-action firearms capable of accepting a detachable magazine and require those in the state to be registered under threat of a felony punishable by four years in prison, Guns.com is reporting.

While not banning existing “assault weapons,” the bill would require owners who possess the guns to register them with the state – which I guarantee is not happening.

This particular gun control bill was one of a package of eight other bills submitted in the aftermath of the Pulse Nightclub shooting in Florida that left 49 people dead.

“None of these measures take away from our Second Amendment right to own a gun,” said state Rep. Robert Wittenberg, D-Oak Park, sponsor of the latest proposal, in a statement about the measure. “Instead, they regulate the safe use of firearms and ensure that those who aren’t fit to have a weapon — such as a suspected terrorist or a person who has threatened violence against a spouse — can’t walk into a store to buy one.”

HB5996 would pick up on common leftist tropes about what an “assault weapon” is … banning any semi-auto or pump-action centerfire rifle, pistol or shotgun that uses either a detachable magazine or a fixed magazine holding more than 10 cartridges (much like the beloved Browning 9mm my father gave to me).

It also – of course – bans any firearm with cosmetic features like a muzzle brake or compensator, barrel shroud, pistol grip on rifles, stocks on pistols or –hysterically – a “revolving cylinder” on shotguns.

If passed, it would be the strictest gun control measures ever passed in the state.

“Assault weapons” already in circulation could be retained by their owners but would need to be registered with the state police. The bill would also empower the agency to conduct annual inspections of the gun to ensure safe storage. Once registered, the owner would have to update their registration every year and could only possess it in working order at shooting ranges or their own property, with the transport to and from being unloaded and in a secured container.

Anyone found breaking the law would be guilty of a felony and face four years in prison.

Gun control nuts in the state think this is awesome and tell us that the Second Amendment is really only about hunting.

“None of the proposed legislation conflicts at all with the Second Amendment,” said Linda Brundage, executive director of the Michigan Coalition to Prevent Gun Violence, as reported by WWMT. “If you need an assault weapon to go hunting in Michigan, I suggest you get target practice. Those are weapons of war they don’t belong in our communities or our streets.”