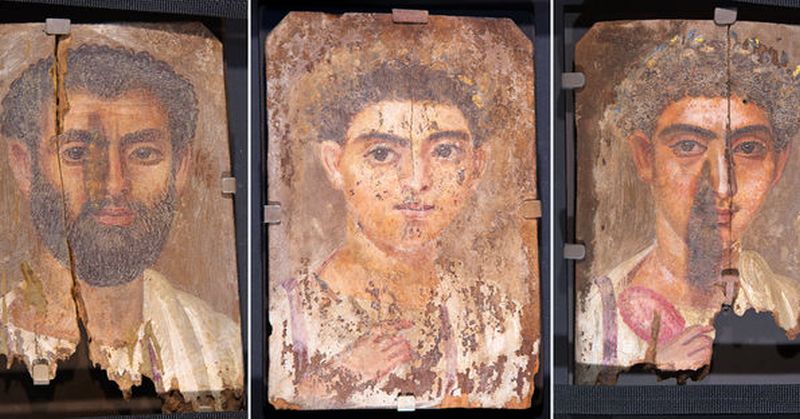 Paintings of recognizable individuals are less common in most museums today than busts.

Whereas busts may make it through the centuries relatively intact, paintings tend to suffer significantly more damage. After all, canvas rots and paints peel.

As a result, paintings from the ancient world are almost unheard of.

Funerary mummy portraits from Tebtunis, Egypt during the second century AD, however, were well preserved by arid conditions.

These portraits were fixed to mummies’ bandages and remained in shockingly fresh condition for nearly two thousand years.

Marc Walton of Northwestern University in Illinois was among the researchers tasked with investigating these portraits. Through their research, Walton and his colleagues were able to determine surprising amounts of information about the painter and the world he lived in.

One conclusion is that they can assign groups of portraits to particular artists. The three shown, for example, seem to be by the same hand. Dr Walton’s method here is to map each picture’s contours by illuminating it sequentially from many directions, building a relief map from the resulting patterns of light and shade. This reveals both the size of the bristles of the artist’s brush and the order in which he has composed the elements of the portrait. For these three, the bristles were 60 microns across, ruling out their being from cattle (160 microns), pigs (120 microns) or cats (30 microns). The best guess is that the artist used squirrel-tail bristles, which are about the right size. On top of this, spectroscopy suggests that in two of the portraits, one mixture of pigments used came from the same batch.

This scientific analysis is supported by an artistic one which shows, for example, a way of painting hands that is shared by all three pictures. At the very least, then, the portraits came from the same workshop. It seems most likely, though, that the same artist painted all of them.

By studying the contents of the portraits, researchers can determine information about the world of the painter beyond his art.

The paintings contained haematite and goethite from Keos in the Aegean Sea and red lead from Rio Tinto, in Spain. The wood on which the portraits are painted, meanwhile, come from central Europe. By isolating where individual parts of these paintings originated from, researchers can learn more about the Roman empire’s extensive trade routes.

Some of the color in the painting is made to look like more expensive pigments than were actually used. Perhaps the painter simply wanted the richest colors available to him while limiting his spending. Or maybe he purposefully fooled customers into paying more while spending less.

The painter was also a shrewd businessman; he mixed indigo and madder to replicate the effect of the period’s most expensive pigment, Tyrian purple, which was extracted from sea snails and worth more than its weight in gold. Determining whether he told his customers of this economy is not, however, within the range of Dr Walton’s instruments.

It’s interesting how much information one can gather from a handful of paintings. Piecing together their origins may be difficult, but it can be done. That’s pretty important when it comes to some of the oldest portraits in the world.