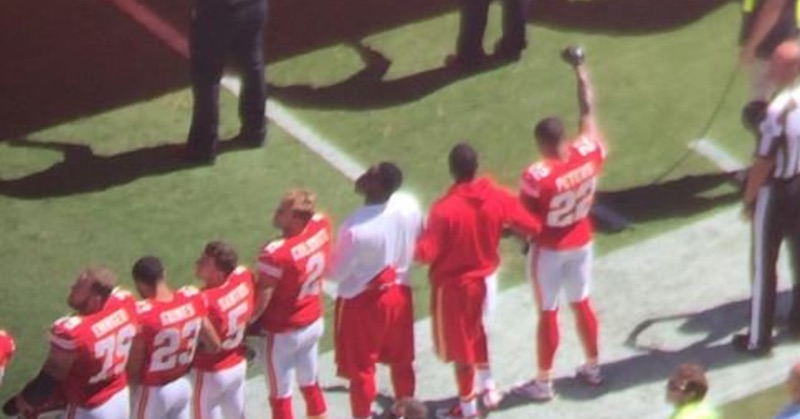 The soap opera of patriotism started by Colin Kaepernick continues:

The latest brouhaha took place when the Kansas City Chiefs decided not to stand with their hands over their hearts for the National Anthem, instead deciding to lock arms together as a sign of solidarity and respect for Americans on both sides of the anthem debate.

They also released a statement explaining their solidarity.

“After having a number of thoughtful discussions as a group regarding our representation during the National Anthem, we decided to be unified as a team and to be respectful of everyone’s opinions, and the remembrance of 9/11.

It’s our job as professional athletes to make a positive impact on our communities and to be proactive when change is needed. Together we are going to continue to have conversations, educate ourselves and others on social issues and work with law enforcement officials and leaders to make an impact on the Kansas City community.”

And that’s fine, I suppose. Except this:

One of the team members, the Chiefs’ cornerback Marcus Peters decided to bring Black Power into the debate.

Marcus Peters of the Chiefs, raising his fist during anthem. Dissent – especially in this NFL climate, – is brave. pic.twitter.com/VaGNS5pD45 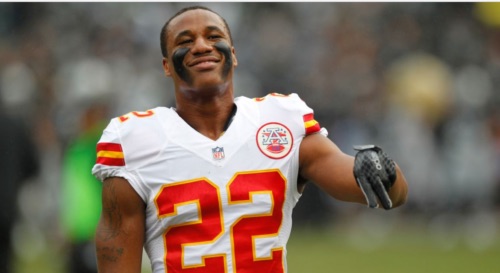 Oakland's very own @marcuspeters with the black power fist during the national anthem ✊🏿✊🏾✊🏽 pic.twitter.com/ySxuCK1mu2

Some Americans were very supportive:

Time to rally around @marcuspeters ✊🏽 People have to know that in the midst of racist backlash, we have their backs. pic.twitter.com/hj69sJQ07v

Others … well, not so much:

@EdgeofSports No, this was brave. You need to re-learn the definition. #Peters was just making an ass of himself. pic.twitter.com/V1s5yPModf

Any other day no problem. But not on 911. Let them go out in community and help to make actual difference

These little demonstrations are spreading across the country – including in our public schools. When will this all stop?