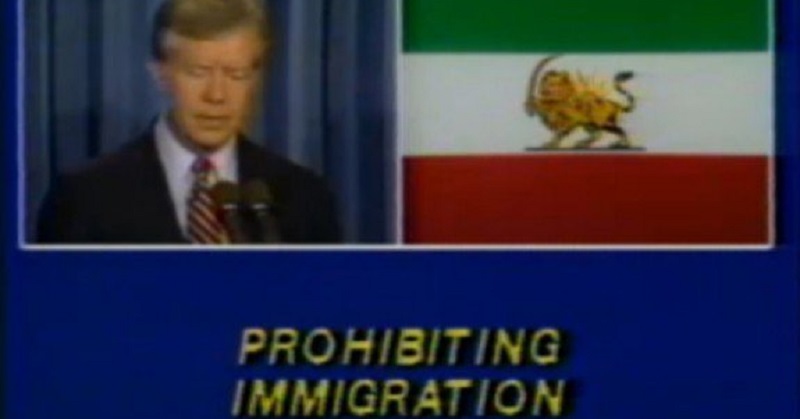 We know now that not only is Trump’s call to halt Muslim Immigration perfectly Constitutional, we also know that past presidents have taken very similar action.

Liberals were furious when it was pointed out that Jimmy Carter also banned immigration for certain folks during the 1980 Iran Hostage Crisis. But that’s precisely what he did and The Gateway Pundit managed to dig up video from ABC News that proves it.

Here’s the transcript from ABC News, highlighting the relevant part:

Ever since Iranian terrorists imprisoned American Embassy personnel in Tehran early in November, these 50 men and women—their safety, their health, and their future—have been our central concern. We’ve made every effort to obtain their release on honorable, peaceful, and humanitarian terms, but the Iranians have refused to release them or even to improve the inhumane conditions under which these Americans are being held captive.

The events of the last few days have revealed a new and significant dimension in this matter. The militants controlling the Embassy have stated they are willing to turn the hostages over to the Government of Iran, but the Government has refused to take custody of the American hostages. This lays bare the full responsibility of the Ayatollah Khomeini and the Revolutionary Council for the continued illegal and outrageous holding of the innocent hostages. The Iranian Government can no longer escape full responsibility by hiding behind the militants at the Embassy.

It must be made clear that the failure to release the hostages will involve increasingly heavy costs to Iran and to its interests. I have today ordered the following steps.

First, the United States of America is breaking diplomatic relations with the Government of Iran. The Secretary of State has informed the Government of Iran that its Embassy and consulates in the United States are to be closed immediately. All Iranian diplomatic and consular officials have been declared persona non grata and must leave this country by midnight tomorrow.

Second, the Secretary of the Treasury will put into effect official sanctions prohibiting exports from the United States to Iran, in accordance with the sanctions approved by 10 members of the United Nations Security Council on January 13 in the resolution which was vetoed by the Soviet Union. Although shipment of food and medicine were not included in the U.N. Security Council vote, it is expected that exports even of these items to Iran will be minimal or nonexistent.

Third, the Secretary of Treasury will make a formal inventory of the assets of the Iranian Government, which were frozen by my previous order, and also will make a census or an inventory of the outstanding claims of American citizens and corporations against the Government of Iran. This accounting of claims will aid in designing a program against Iran for the hostages, for the hostage families, and other U.S. claimants. We are now preparing legislation, which will be introduced in the Congress, to facilitate processing and paying of these claims.

Fourth, the Secretary of Treasury [State] and the Attorney General will invalidate all visas issued to Iranian citizens for future entry into the United States, effective today. We will not reissue visas, nor will we issue new visas, except for compelling and proven humanitarian reasons or where the national interest of our own country requires. This directive will be interpreted very strictly.