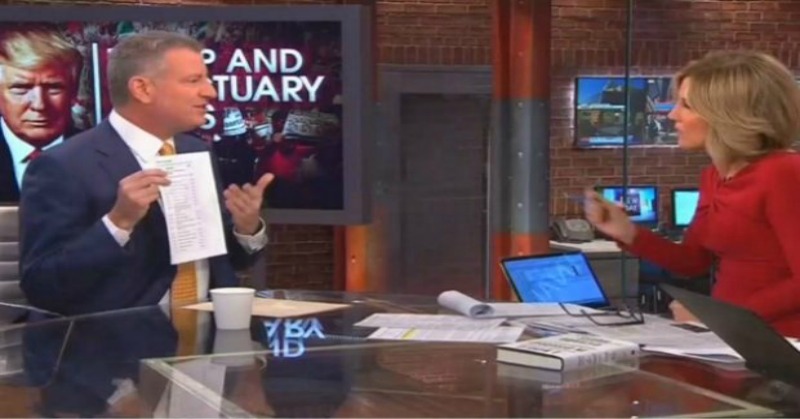 President Trump has signed an Executive Order demanding sanctuary cities cooperate with the deportation of illegal aliens or lose federal funding. Not surprisingly, one of the most liberal mayors in America decided that he wasn’t going to help Trump, but it’s his reason why that has people screaming with frustration.

New York City Mayor Bill De Blasio runs one of America’s biggest sanctuary cities, and he’s not ashamed of it. He claims that he will not work with Immigration and Customs Enforcement (ICE) officers to deport illegal immigrant unless they have committed one of 170 crimes such as possessing a firearm.

Low-level crimes like theft or running a red light will not qualify an illegal for deportation. If you think that alone is frustrating, listen to the clip below to hear why he won’t hand them over to the federal authorities:

“There are very low-level crimes for example, small amounts of marijuana possession, going through a stop-light that doesn’t cause any damage to anyone, those are areas where we will not work to see someone deported. Why? Because these are members of a family in our community, say it’s the breadwinner in that family, so you deport the breadwinner and the rest of the family including the children are left without anyone.”

Essentially what De Blasio is saying is that it’s okay to break the law in New York (aside from being in the country illegally, of course) as long as you are a “breadwinner.”

I would like to ask how it is possible for an illegal alien to be a breadwinner when it is illegal for businesses to hire someone who is in this country illegally. I also wonder how they are getting paid for their labor, considering you have to be a legal resident to have a Social Security Number, and you need an SSN to fill out the paperwork necessary to pay taxes. (You know, since liberals demand everyone “pay their fair share” and all.)

How you can be a mayor and support such lawlessness, I have no idea. It’s enough to make you wonder what is going on behind closed doors.