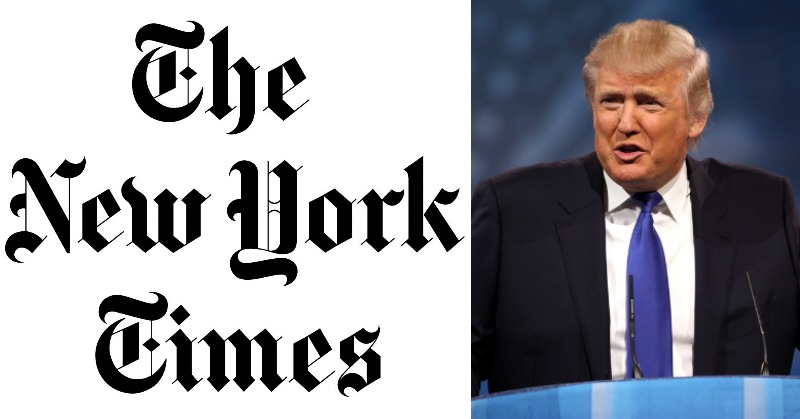 The New York Times has been outed yet again as fake news purveyors with a new article that appears to directly contradict a previous one back in January. Just a few weeks ago, The Times ran an article claiming that the Trump campaign’s communications were intercepted, but in March, they claimed that President Donald Trump’s assertion that his campaign was wiretapped by former President Barack Obama was baseless.

The two articles both featured Michael S. Schmidt in the byline. The Jan. 19 article was titled: “Intercepted Russian Communications Part of Inquiry Into Trump Associates“

And on March 4: “Trump, Offering No Evidence, Says Obama Tapped His Phones“

Here’s what the Times reported on March 4 (bold for emphasis is mine):

The president’s decision on Saturday to lend the power of his office to accusations against his predecessor of politically motivated wiretapping — without offering any proof — was remarkable, even for a leader who has repeatedly shown himself willing to make assertions that are false or based on dubious sources.

Is the Times finally admitting that they are a “dubious source”? Because they themselves reported that Trump associates were under investigation and that there were intercepted communications.

The continuing counterintelligence investigation means that Mr. Trump will take the oath of office on Friday with his associates under investigation and after the intelligence agencies concluded that the Russian government had worked to help elect him. As president, Mr. Trump will oversee those agencies and have the authority to redirect or stop at least some of these efforts […]

Numerous news outlets, including The New York Times, have reported on the F.B.I. investigations into Mr. Trump’s advisers. BBC and then McClatchy revealed the existence of a multiagency working group to coordinate investigations across the government.

According to their own reporting, it’s not far off to connect the dots here on wiretapping and the potentially heavy-handed influence of Obama on the investigation.

In a prime example of fake news, the Times had no issue using this information when they wanted to spin it against the Trump administration, but when he redirected that information (so far it’s unclear where he’s getting it from) to highlight what an extraordinary scandal this is if it bears out, suddenly the Times dumps their own reporting.

It will be very interesting to see what information comes to the fore over time; in the meantime, Trump has deftly turned the liberal mainstream media’s narrative against them and they are predictably scrambling to spin it in their favor.

Good luck with that …