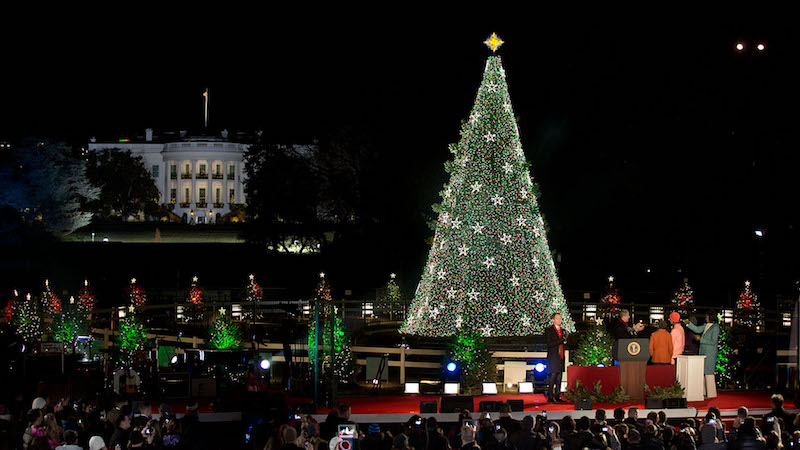 The Obama Administration has banned saying “Merry Christmas” at at least one VA center.

In an e-mail to employees, Department of Veterans Affairs supervisors at the Salem, Virginia, center has banned employees from any religious expression in pubic areas.

“Employees are permitted to engage in private religious expression in their personal work areas that are not regularly open to the public,” the message to employees reads, noting that Christmas music was banned as well. “If an employee’s supervisor has previously granted them permission to listen to music in their personal work area, they should be reminded that music travels and should be secular (non-religious) and appropriate to the work environment.” 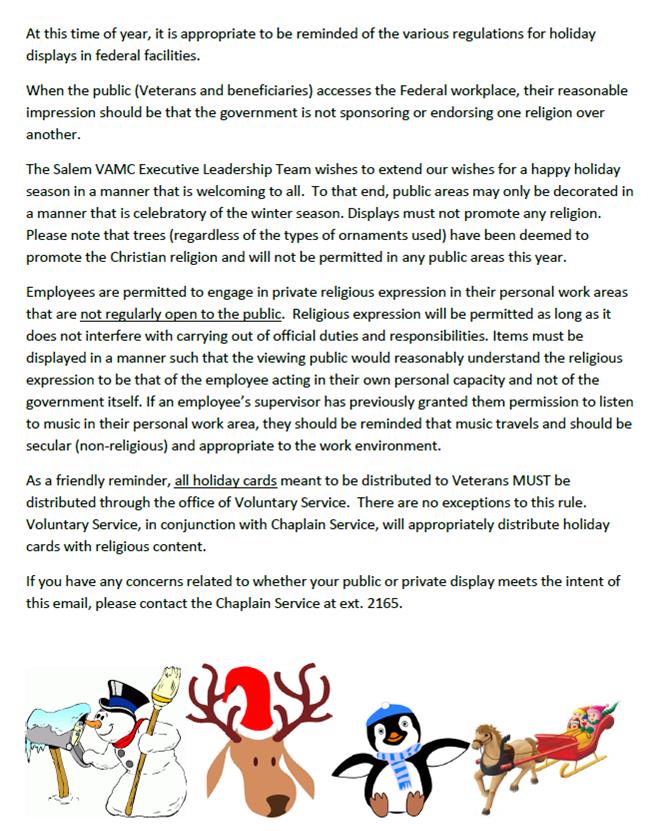 At first, they tried to ban the display of Christmas Trees, but after an angry meeting between VA supervisors and about 150 employees, they backed down and said Christmas trees would be allowed. Here’s how WSLS reports it:

A letter from the Salem VA Medical Center to all employees stating Christmas trees will not be allowed in public areas this holiday season ignites a debate. But, after a heated meeting Friday afternoon — management is going todeck the halls and light the tree after all.

Christmas trees have always been a part of Christmas at the Salem VA Medical Center.

For veteran Vicki Jackson, the tree symbolizes overcoming a hard time in her life.

“It brought me over a big hump, because Christmas is hard for me, it’s real hard for something that happened years ago,” said Jackson. “And, to see that tree gone it’s not Christmas.”

It’s not just Jackson; it’s a message that provoked Salem VAMC employees, veterans and others in the community.

And, after a closed meeting between management and up to 150 staff members; now, a tree will stand tall this holiday season at the Salem VAMC.

“It was very tense in there with the director and amongst the employees,” said Jackson. “I wasn’t supposed to be there, but I went anyhow.”

In a statement the Salem VAMC public affairs officer said, “it was determined that Christmas trees could be displayed in public areas so long as they were accompanied by the respective symbols of the two other faiths that celebrate holidays during this holiday season – namely symbols commemorating Hanukkah and Kwanzaa.

The decision comes after a letter from the Salem VAMC to employees which read, “trees have been deemed to promote the Christian religion and will not be permitted in any public areas this year.”

“I don’t look at the tree as the birth of Christ, I don’t,” said Jackson. “I look at is as a tree being decorated with ornaments.”

Of course, as Breitbart points out, Christmas is not only an official federal holiday, but Christmas Trees grace the White House front lawn and the Capitol Lawn.

In 1989, the Supreme Court ruled that Christmas Trees were not a violation of the “endorsement test.”

“The Christmas tree, unlike the menorah, is not itself a religious symbol. Although Christmas trees once carried religious connotations, today they typify the secular celebration of Christmas,” wrote Justice Harry Blackmun, upholding the government’s displaying a 40-foot Christmas tree on public land outside a courthouse.

“Numerous Americans place Christmas trees in their homes without subscribing to Christian religious beliefs, and when the city’s tree stands along in front of the City-County building, it is not considered an endorsement of Christian faith,” he added.

But when was the last time the Obama Administration gave a damn what the courts said anyway?