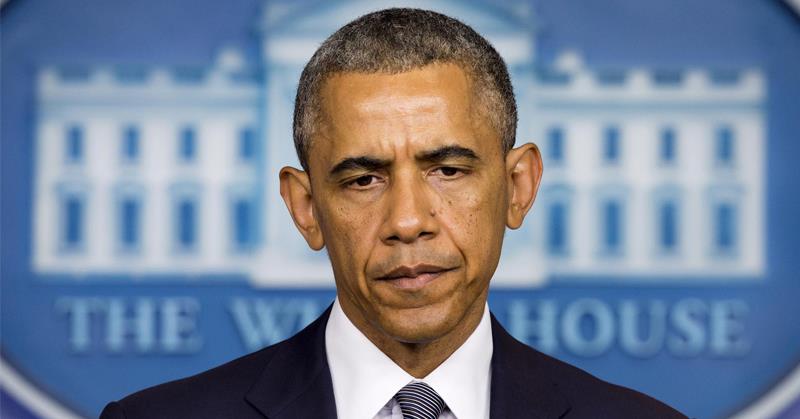 Maybe Barack Obama thinks if he says something that’s completely false, perhaps they’ll believe it if he tweets it.

So speaking to troops at MacDill Air Force Base in Tampa, Florida, when Obama said “Over the last eight years, no foreign terrorist organization has successfully planned and executed an attack on our homeland,” he punctuated the lie by tweeting it:

"Over last 8 years, no foreign terrorist organization has successfully planned and executed an attack on our homeland" —@POTUS

In case anyone wanted to provide a clarification, a big fat asterisk to Obama’s remarks, here’s a pretty good list of terrorist attacks that have occurred since Obama took office, courtesy The Daily Wire. Ones on American soil are in bold:

Little Rock, Arkansas, June 1, 2009. Abdulhakim Mujahid Muhammad shot and murdered one soldier, Army Pvt. William Andrew Long, and injured another, Pvt. Quinton Ezeagwula, at a military recruiting station in Little Rock. Muhammad reportedly converted to Islam in college and was on the FBI’s radar after being arrested in Yemen–a hotbed of radical Islamic terrorism–for using a Somali passport, even though he was a U.S. citizen. In a note to an Arkansas judge, Muhammad claimed to be a member of al-Qaeda in the Arab Peninsula, the terror group’s Yemen chapter.

Fort Hood, Texas, November 5, 2009. Major Nidal Malik Hasan shot up a military base in Fort Hood and murdered 14 people. Hasan was in contact with al-Qaeda terrorist Anwar al-Awlaki prior to the attack and shouted “Allahu Akbar!” as he fired upon the soldiers on the Fort Hood base. After being sentenced to death, Hasan requested to join ISIS while on death row. It took six years for Obama to acknowledge the shooting as a terror attack instead of “workplace violence.”

Frankfurt, Germany, March 2, 2011. Arid Uka, a Kosovo Albanian Muslim, shot and murdered two U.S. airmen who were headed to fight in Afghanistan at a Frankfurt airport and injured two others. Uka was sentenced to life in prison and is believed to have been radicalized through jihadist propaganda on the Internet, as his Facebook page was laced with jihadist statements. He is also believed to have acted alone.

Benghazi, Libya, September 11, 2012. Ansar al-Sharia, an Islamic terror group, attacked the U.S. consulate in Benghazi and murdered Ambassador Chris Stevens and three other Americans. Obama and then-Secretary of State Hillary Clinton blamed the attack on a video, a blatant lie.

London, Britain, May 22, 2013. An off-duty British Army solider was murdered by Islamic fundamentalists.

Moore, Oklahoma, September 24, 2014. Alton Nolen beheaded a woman, Colleen Huff, at a Vaughan Foods plant and stabbed and injured another person. While Nolen’s motives are unclear, he appears to have been another radicalized Muslim who was obsessed with beheadings.

Queens, New York, October 23, 2014. Zale Thompson, another self-radicalized Muslim, injured two police officers with a hatchet before being shot dead by other cops. Thompson reportedly indoctrinated himself with ISIS, al-Qaeda and al-Shabab–a Somali jihadist terror group–websites and was a lone wolf attacker.

Paris, France, January 9, 2015. A gunman who pledged allegiance to ISIS held people in a kosher supermarket hostage and killed four of them.

Copenhagen, Denmark, February 23, 2015. A gunman who swore loyalty to the leader of ISIS opened fire at a free speech forum and at people outside a synagogue. The terrorist murdered two people.

Garland, Texas, May 3, 2015. Two gunmen shot up the Curtis Culwell Center in Garland, where a Mohammed cartoon contest was taking place, and were killed by a police officer. ISIS claimed responsibility for the attack.

Chattanooga, Tennessee, July 16, 2015. Muhammad Youssef Abdulazeez shot and killed four Marines and a sailor at a military base in Chattanooga and was believed to have been inspired by ISIS.

Palestinian Intifada against Jews, September 13, 2015. A wave of Palestinian terror attacks toward Jews in Israel began in September, which only worsened after the incitement from Palestinian Authority President Mahmoud Abbas.

Paris, France, November 13, 2015. ISIS launched a massive, coordinated terror attack in the city of Paris that resulted in at least 129 dead and 352 people injured.

Brussels, Belgium, March 22, 2016. ISIS set off bombs and gunfire at a Brussels’s city airport and a subway station, killing 30 people and injuring at least 230 people.

So, no, Mr. President – nobody believes you when you tell us such nonsense.