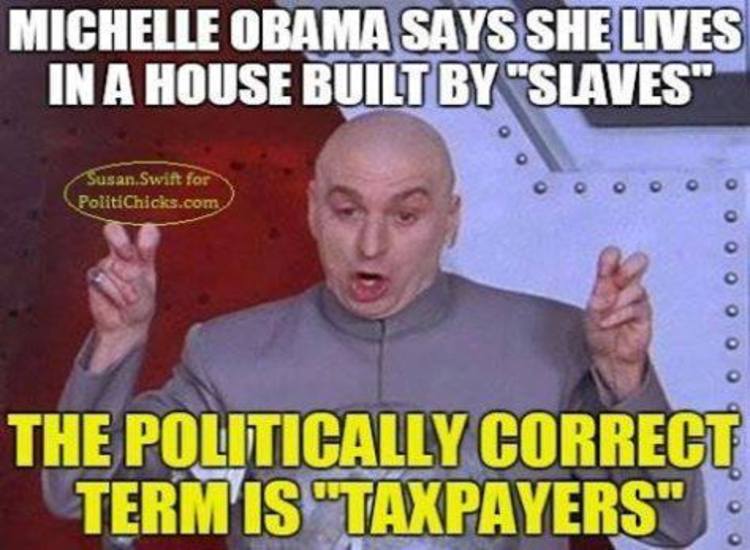 Oh, the White House was built by slaves Michelle? You mean US taxpayers… I know, sometimes it’s hard to tell the difference, it confuses us too.

Michelle Obama gave the commencement address to graduates of City College in New York. While she was trying to inspire the students, Obama could not refrain from injecting race into it, as she always seems to do:

“It’s the story that I witness every single day, when I wake up in a house that was built by slaves, and I watch my daughters – two beautiful, black young women – head off to school, waving goodbye to their father, the President of the United States…

While I think it’s fair to say that our Founding Fathers never could have imagined this day… you are the fruits of their labor. Their legacy is very much your legacy.”

There’s just one big problem with her statement, which has also been echoed by her husband: it’s not entirely true. But don’t expect the media to tell you why.

First, the White House was not built solely — or even primarily — by slaves.

Most of the labor force consisted of local White laborers and artisans (from Maryland and Virginia) and a number of immigrants from Ireland, Scotland, and other European nations.

As the project neared completion — the lime-based whitewashing that gives the building its iconic appearance…slaves were indeed added to the mix.

But once again, facts get in the way of the Obama’s preachy race-baiting.

That’s because the U.S. government actually paid the slaves who worked on the White House.

This is in addition to the fact that Mrs. Obama is herself a multi-millionaire, along with her Presidential husband, a graduate of Harvard University who is herself a walking symbol of the success that can come to anyone who is willing to work hard and apply one’s talent in America.

In other words, even as Michelle Obama herself rebukes the nation’s history of racism, she is a living example that America has done much to overcome it.

Kruta also refutes the offensive comment of Mrs. Obama that The Founders could “never imagine” a black person in The White House, when many specifically wanted to eliminate racial differences:

“The Deleted Passage in The Declaration of Independence” written by Thomas Jefferson is but one example, though later removed to win the signatures of southern colonies:

He has waged cruel war against human nature itself, violating its most sacred rights of life and liberty in the persons of a distant people who never offended him, captivating & carrying them into slavery in another hemisphere or to incur miserable death in their transportation thither. This piratical warfare, the opprobrium of infidel powers, is the warfare of the Christian King of Great Britain. Determined to keep open a market where Men should be bought & sold, he has prostituted his negative for suppressing every legislative attempt to prohibit or restrain this execrable commerce. And that this assemblage of horrors might want no fact of distinguished die, he is now exciting those very people to rise in arms among us, and to purchase that liberty of which he has deprived them, by murdering the people on whom he has obtruded them: thus paying off former crimes committed against the Liberties of one people, with crimes which he urges them to commit against the lives of another.

The infamous three-fifths clause of The Constitution, although often ignorantly condemned as dehumanizing of slaves, was a strategic measure to erode the power of the southern states in The Congress, and ultimately lead to the slaves’ emancipation.

A separate clause in The Constitution sought to eliminate the slave trade to American shores in twenty years’ time.

Once again, the Obama’s never let historical facts get in the way of their race-baiting disses of America.