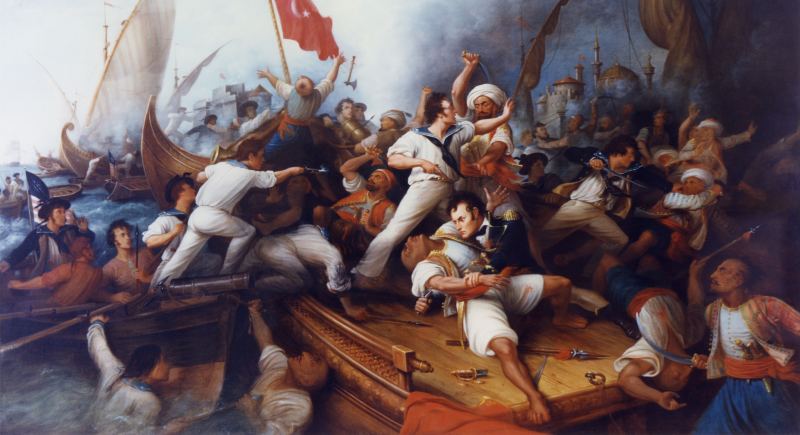 We can learn a lot about how deal with current threats from taking a look at America’s first war against Islamic terrorists.

The First Barbary War (1801–1805) also known as the Tripolitan War or the Barbary Coast War, was the first of two wars fought between the United States and the Northwest African Berber Muslim states known collectively as the Barbary States. These were the Ottoman provinces of Tripoli, Algiers, and Tunis, which were enjoying a large autonomy, as well as the independent Sultanate of Morocco.

The war was fought because U.S. President

Thomas Jefferson refused to pay the high tributes demanded by the Barbary states and because they were seizing American merchant ships and enslaving the crews for high ransoms. It was the first declared war the United States fought on foreign land and seas.

Obama can learn a lot about how we should be dealing with Islamic extremists from Thomas Jefferson. 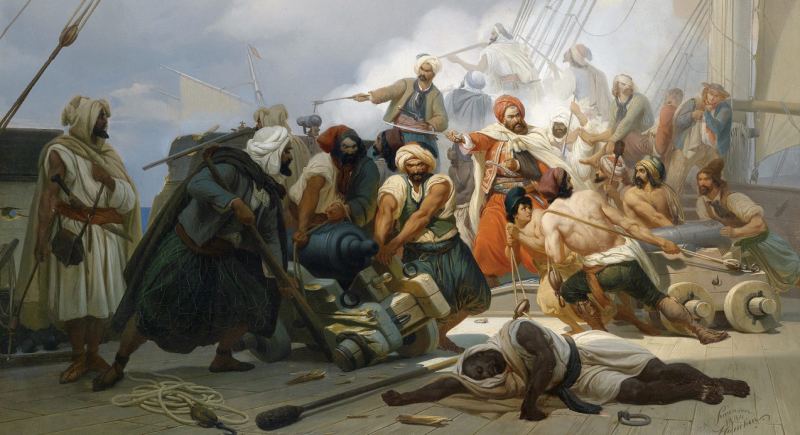 In 1786, Jefferson and John Adams met with Tripoli’s ambassador to Great Britain. They asked this ‘diplomat’ by what right his nation attacked American ships and enslaved her citizens and why the Muslims held such hostility toward this new nation, with which neither Tripoli nor any of the other Barbary Coast nations had any previous contact. The answer was quite revealing. Sidi Haji Abdul Rahman Adja (the ambassador) replied that Islam:

“Was founded on the Laws of their Prophet, that it was written in their Qur’an, that all nations who should not have acknowledged their authority were sinners, that it was their right and duty to make war upon them wherever they could be found, and to make slaves of all they could take as Prisoners, and that every Musselman (Muslim) who should be slain in battle was sure to go to Paradise.”

That is indeed quite revealing. Yet, America continued paying ransoms to these terrorists for the next fifteen years or so. Until Jefferson became President. Then, the Pasha (leader) of Tripoli sent a demand to the new leader for an immediate payment of $225,000 and $25,000 per year on an ongoing basis. Jefferson flatly refused, leading the Pasha to cut down the flagpole of the American consulate and declaring war on the United States. The rest of the terrorist states followed suit.

Jefferson had formerly been against raising a navy, but this soon changed as he was determined to meet force with force. A squadron of vessels was sent to the area and Congress authorized Jefferson to have the US ships seize all vessels and goods that belonged to the Pasha and anything else deemed necessary. As they saw the US was actually committed to the fight, Algiers and Tunis quickly abandoned the war and allegiance to Tripoli. Obviously, the US won the war. In fact, this was the reason why the line “to the shores of Tripoli” was added to the Marine Corps hymn.

Wikipedia has more on the legacy of this war:

The First Barbary War was beneficial to the reputation of the United States’ military command and war mechanism, which had been up to that time relatively untested. The First Barbary War showed that America could execute a war far from home, and that American forces had the cohesion to fight together as Americans rather than separately as Georgians or New Yorkers. The United States Navy and Marines became a permanent part of the American government and American history, and Decatur returned to the U.S. as its first post-Revolutionary war hero.

However, the more immediate problem of Barbary piracy was not fully settled. By 1807, Algiers had gone back to taking American ships and seamen hostage. Distracted by the preludes to the

War of 1812, the U.S. was unable to respond to the provocation until 1815, with the Second Barbary War, in which naval victories by Commodores William Bainbridge and Stephen Decatur led to treaties ending all tribute payments by the U.S.

Watch this video history of the First Barbary War:

The bottom line here is that appeasement makes the enemy bolder, and they will continue to increase their demands until they are destroyed or neutralized.

The way to deal with ISIS and Islamic extremism in general is to crush and neutralize the threat, not negotiate with it, or try and win hearts and minds. The Islamists only understand force.

President Obama must get serious about fighting Islamic extremism, our national security requires it.