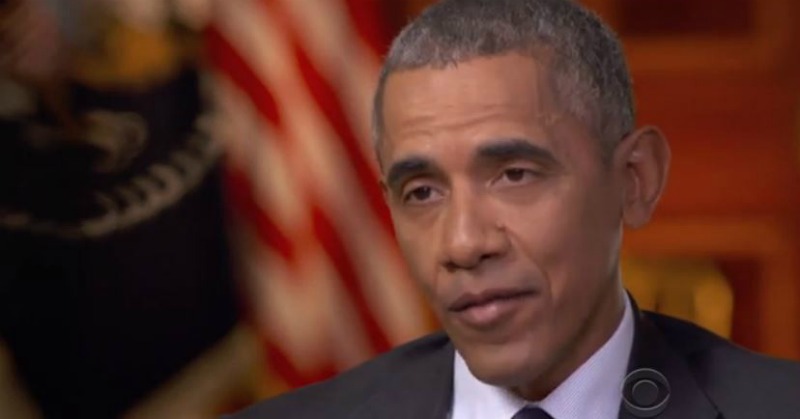 During an interview with CBS’s 60 Minutes, President Obama had the gall to claim that during his tenure, the U.S. has “defended them [Israel] consistently in every imaginable way,” and that his shameful move at the U.N. to abstain from a vote about Israeli settlements, which allowed the international body filled with anti-Semites to condemn our ally, was done to make a “point.”

Obama actually claimed that the “point” he made at the U.N. was just something friends do. Seriously.

“We are reaching a tipping where the pace of settlements, during the course of my presidency has gotten so substantial that it’s getting harder and harder to imagine an effective, contiguous Palestinian state,” Obama said to Steve Kroft.

“Because of our investment in the region, and because we care so deeply about Israel, I think has a legitimate interest in saying to a friend, ‘This is a problem,'” Obama said.

Kroft began by asking Obama: “A few weeks ago you allowed the U.N. Security Council to pass a resolution condemning Israel’s settlements in the West Bank. It caused a major fallout between the United States and Israel. Was it your decision to abstain?”

To which Obama responded: “Yes, ultimately.”

Kroft then asked the soon-to-be former president “Why did you feel like you had to do that?”

Take a look at Obama’s egregious answer, courtesy of RealClearPolitics:

Well, first of all, Steve, I don’t think it caused a major rupture in relations between the United States and Israel. If you’re saying that Prime Minister Netanyahu got fired up, he’s been fired up repeatedly during the course of my presidency, around the Iran deal and around our consistent objection to settlements. So that part of it wasn’t new. And despite all the noise and hullabaloo– military cooperation, intelligence cooperation, all of that has continued. We have defended them consistently in every imaginable way. But I also believe that both for our national interests and Israel’s national interests that allowing an ongoing conflict between Israelis and Palestinians that could get worse and worse over time is a problem. And that settlements contribute. They’re not the sole reason for it, but they’re a contributing factor to the inability to solve that problem. And–

Kroft interjected, “And you wanted to make that point?” to which Obama continued:

Not only did I want to make that point. We are reaching a tipping where the pace of settlements, during the course of my presidency has gotten so substantial that it’s getting harder and harder to imagine an effective, contiguous Palestinian state. And I think it would have long-term consequences for peace and security in the region, and the United States, because of our investment in the region, and because we care so deeply about Israel, I think has a legitimate interest in saying to a friend, “This is a problem.” And we’ve said it– look, it’s not as if we haven’t been saying it from Day One. We’ve been saying it for eight years now. It’s just that nothing seemed to get a lot of attention.