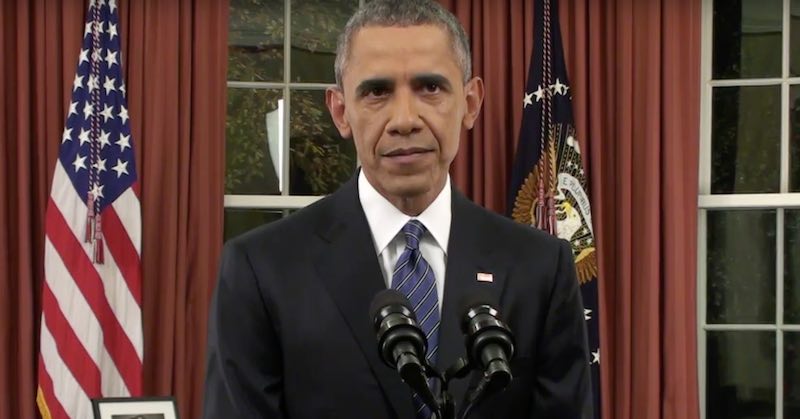 In a much-hyped prime-time speech, Barack Obama told the nation he will do absolutely nothing new to defeat ISIS – except push for more gun control.

In the 15-minute speech, the President outlined “four steps” he claims his administration will take to “destroy” ISIS – except they’re the same four “steps” he’s already taking.

First, the military will “continue to hunt down terrorist plotters in every country where it is necessary.” Except Saudi Arabia, Qatar and a host of other countries Obama’s too afraid to deal with.

Second, Obama said he will continue to provide support and training for local forces fighting ISIS in Syria and Iraq. This is nothing new – and it’s going oh so well.

Obama’s third “step” is to work with friends and allies (like France and the U.K., but not Russia) to disrupt ISIS operations.

Obama’s fourth step is to find an end to the Syrian War – something he’s been completely impotent on from Day One.

And since Obama promised to do absolutely nothing new, he turned to Congress and demanded – what else? Gun Control!

He demanded Congress ban anyone on a “no-fly” list from purchasing guns, make it “harder” to purchase “assault weapons,” which presumably means reincarnating the ineffective “Assault Weapons Ban,” and pass a new Authorization for the Use of Military Force.

He ended by demanding that Americans stop saying bad things about Muslims. They’re not all terrorists, they’re peaceful, fuzzy people who just want hugs and kisses and some hot cocoa and a book before bed.

Millions of Muslim Americans – Obama said – are peace-loving people who abhor ISIS as much as everyone else. He ignored, of course, the sizable minority whosympathize with ISIS and their tactics

“It is the responsibility of all Americans of every faith to reject discrimination, religious tests and proposals the Muslim-Americans should be treated differently,” he said. “That kind of divisiveness plays into the hands of groups like ISIS. Muslim Americans are our friends, our neighbors, our sports heroes.”

It’s doubtful this speech – full of platitudes and feel-good comments – will make anyone feel any better.

And for the first time, a majority – 53 percent – say the United States should send ground troops to fight ISIS. Almost seven in ten believe America’s response to ISIS has not been aggressive enough.

The televised prime-time address was only the third in his presidency. The first address was at the end of “combat operations” in Iraq in 2010 and later after the Gulf of Mexico oil spill.