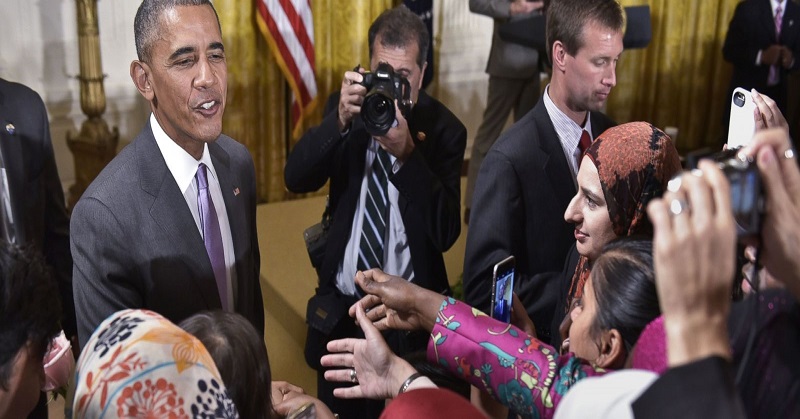 Hours before Donald Trump was set to accept the Republican Party’s nomination for president in Cleveland, President Obama challenged Trump’s proposals to temporarily ban Muslims from entering the country.

“Discriminating against Muslim Americans is also an affront to the very values that already make our nation great,” Obama said during the White House’s annual Eid al-Fitr reception, celebrating of the end of the Muslim holy month of Ramadan.

“Singling out Muslim-Americans,” he said, “feeds the lie of terrorists like ISIL that the West is somehow at war with a religion that includes over a billion adherents. That’s not smart national security.”

The White House reception comes in the aftermath of recent deadly attacks both on U.S. soil and abroad by so-called Islam devotees.

Omar Mateen, the son of Afghani immigrants, committed the worst mass shooting in U.S. history at a gay nightclub in Orlando last month. Islamic terrorists killed several hundred in Bangladesh, Iraq, Turkey, and Saudi Arabia during the month of Ramadan. Last week, 84 people were killed and more than 300 were injured when a cargo truck was deliberately driven into crowds celebrating Bastille Day in Nice, France.

Nonetheless, Obama refuses to admit any link between Islam and terrorism.

Chants of “four more years” rang out as Obama spoke about the “challenging times” the country is currently facing.

President Obama has continually asserted that Muslims have made significant contributions to building the United States and that Islam was “woven into the fabric” of our nation.

Obama needs a history lesson. It would be accurate to say radical Muslims have been our enemies since the beginning of the republic.

Muslims did have an influence on early America, they were a major part of the Slave Trade. Throughout Islam’s centuries of history, an estimated 180 million were enslaved. African slaves brought to America were purchased at Muslim slave markets.

Our founding fathers were at war with Islamic extremists, who provided both the need for the US Marines Corps, and our first lesson in battling extremism: after winning independence from England, American vessels no longer enjoyed British protection and were consequently raided and plundered by radical Islamic pirates.

Here’s John Quincy Adams, our sixth President’s, thoughts about “the religion of peace”:

““The natural hatred of the Mussulmen towards the infidels is in just accordance with the precepts of the Koran. [..]”

An alarming number of Muslims agree that violence is a legitimate response to those who insult Islam. According to a recent Center for Security Policy poll, a full majority of 51% of American Muslims believe that “Muslims in America should have the choice of being governed according to shariah.”

It would be safe to assume that they would want to replace the U.S. Constitution with Islamic law. Acknowledging these facts does not make us “anti-Muslim,” “bigoted,” or “anti-American.”