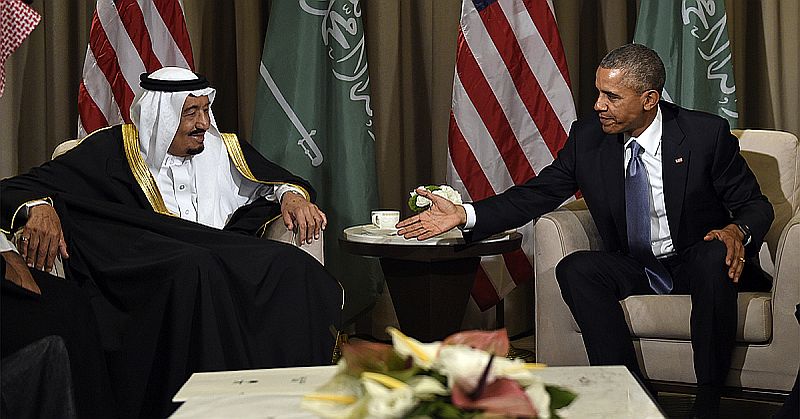 The Obama Administration has become infamous for weapons trafficking and arms deals during his tenure.

Whether it was the arming of Mexican drug cartels in Operation Fast and Furious, the indiscriminate arming of rebel groups in Syria and Libya, or the indirect arming of the Islamic State, it seems like there is no one on the planet to whom the Obama administration is unwilling to give weapons.

That is, unless you are a law-abiding American citizen and intend to use a weapon for lawful self-defense or sporting purposes, of course. But that’s none of my business…

What is my business, though, at least what should be everyone’s business, is the fact that the Obama administration just gave over $1 billion worth of arms to the Saudis last month, all without any form of debate. We are not even getting any benefits from this arms deal.

And that’s not even the worst part about it.

Despite the seriousness of this allegation, the Obama administration is attempting to push through another weapons sale in a long line of many—this time with a price tag of $1.15 billion. By law, Congress may block any such transfer within 30 days of being notified, but this notification came on August 8—and congressional business was not scheduled to resume until September 6.

That leaves a mere two days for Congress to debate and potentially vote on the sale—a tall order in the House of Representatives and an impossibility in the Senate. While it’s true that the United States has regularly supplied Saudi Arabia with weapons with little fanfare since at least the 1970s, it’s long past time to reconsider this arrangement.

As our bipartisan letter explains, “3,704 civilians, including 1,121 children have been killed during the conflict [between Saudi Arabia and Yemen]. 2.8 million Yemenis have been internally displaced by the fighting, with 83 percent of the population now dependent on humanitarian assistance for survival. Any decision to sell more arms to Saudi Arabia should be given adequate time for full deliberation by Congress.”

The American people deserve to know that their tax dollars are funding weapons that may be used by a foreign government against civilians. And as their representatives in Congress, we must not be afraid to question the status quo.

The whole deal was done in a sketchy manner on purpose. By signing off on it on August 8, at a time when Congress was in recess until September 6, it gave merely two days for debate over the deal, as Amash noted.

Two days, for such a massive deal to a likely sponsor of terrorist groups, is hardly an acceptable time frame for debate. And debate is exactly what this deal requires. In fact, not just this deal, but arms trade deals with foreign countries in general deserve re-examination.

When the United States government gives arms to a foreign power, it loses control of those weapons and what is done with them. Just like how the Saudis used American weapons to carry out attacks on civilian targets in Yemen, there are countless incidents of American weapons given to other nations or groups ending up in situations where war crimes are committed.

It’s almost like giving one of your guns to someone you know has shady connections to the Mafia, and then a few years later a police investigation finds that gun at the center of several murder cases.

In most states where private sales of firearms are legal, the buyer and seller must not have reason to believe that either party is an ineligible possessor. Or, for a more accurate way of comparing, you must have no doubt in your mind that the person to whom you are selling a gun is not a felon.

Can that kind of certainty be applied to the Saudis? Are we so sure that they are not involved in sponsoring and supporting terrorist activities that we can give them billions of dollars worth of arms without any reason to be suspicious? The Obama administration seem sot think not.

No, you’re the one who shouldn’t have a gun. Because you’re more dangerous than the Saudis, apparently.