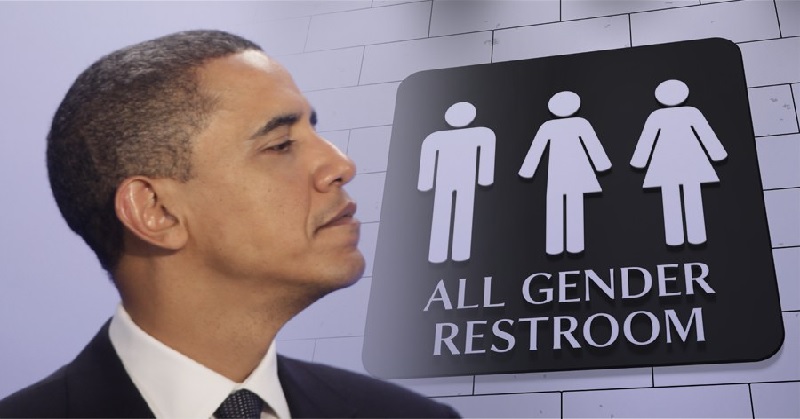 BuzzFeed reports that it has obtained a draft notice to federal agencies regarding a new regulation that will appear in the Federal Register this week, mandating that nearly all of the over 9,000 federally-operated facilities (other than the White House, Congress, national parks, and a few other exceptions) in the United States allow transgendered employees and visitors to use whichever bathroom with which they identify:

“This includes all kinds of Americans,” [General Services Administration spokeswoman Ashley] Nash-Hahn said. “We wanted to make clear that a person can use facilities that match their gender identity, and we think that’s a good thing.”

A bulletin about the rule, which was circulated to agency heads on Aug. 8 by GSA Administrator Denise Turner Roth, states, “Federal agencies occupying space under the jurisdiction, custody, or control of GSA must allow individuals to use restroom facilities and related areas consistent with their gender identity.”

Chai Feldblum, a member of the federal Equal Employment Opportunity Commission, told BuzzFeed News the rule is of “great significance.” She added, “This type of requirement can change the default for what life is like for those federal employees and people who enter federal buildings.”

Under the new regime, requiring transgendered people to use separate, single-occupancy restrooms (such as the ones Target will begin installing as a compromise) won’t be permitted, either. Nor will proof of sex-change surgery be required.

It’s whatever bathroom anybody wants in Uncle Sam’s buildings, and you’ll just have to take their word for it that they’re really transgendered. What could go wrong?

Spokespeople from the federal Equal Employment Opportunity Commission and the advocacy group National Center for Transgender Equality were of course thrilled with the development. Really, is there any difference these days between the EEOC and [Insert Any Leftist Identity Group Here]?

Lastly, the new regulation could set the stage for even more legal battles between the federal government and the states:

But that enforcement is not without resistance. More than 20 states have sued the federal government in recent months for using legal interpretations to clarify protections for transgender people in schools and workplaces. Two lawsuits, one led by Texas and another by Nebraska, challenge guidance documents and argue that bans on sex discrimination do not cover transgender discrimination.

I suppose that with Barack Obama’s presidency coming to a close, he couldn’t resist one more exercise of rank executive power to appease his most extreme constituencies. After eight years of that sort of thing, it must be hard to let go.