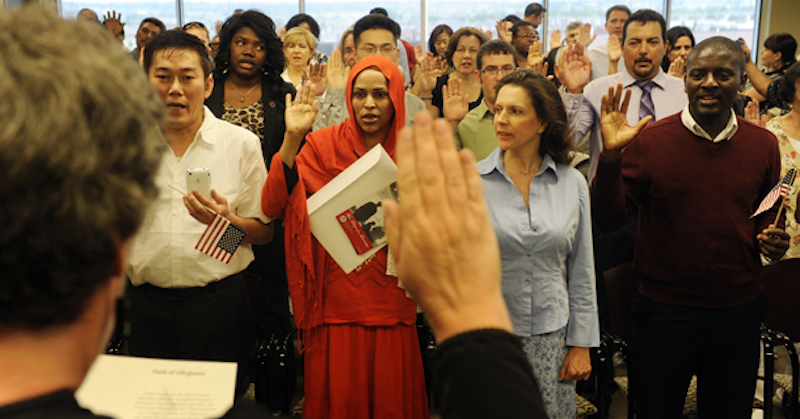 This decision is not one that can be easily put into action, and millions of people have chosen to take this path over the last decade, take on the paperwork and time to become assimilated into the greatest nation on earth.

The climax of the process is taking the oath of citizenship. This is the point where an individual becomes a full-fledged member of American society. For anyone going through the process, it is a momentous occasion.

While it is a joy to do this, it does not come without a certain responsibility. In the citizenship oath, a person must, as part of the pledge, maintain a willingness to bear arms on behalf of the United States in defense of the homeland; certainly no small responsibility.

However, the Obama administration is removing this clause from the oath, and is thus taking away a huge part of the responsibility associated with being a citizen.

Rich Tucker at Breitbart reported on this outrageous change:

Under the Obama administration’s expansive interpretation of executive authority, legal immigrants seeking citizenship through the nation’s Naturalization process are now exempt from a key part of the Oath of Allegiance.

Immigrants seeking to become citizens no longer have to pledge to “bear arms on behalf of the United States.” They can opt out of that part of the Oath. Nor do they have to cite any specific religious belief that forbids them to perform military service.

This radical change was announced a year ago, in July of 2015. Congress did not enact the change in new legislation. There was no congressional debate, no filibuster in the US Senate, and no sit-in in the House to demand that a bill to repeal the USCIS action be brought to a vote.

The timing of this change could not be more symbolic of the utter contempt the Obama administration has for the immigration system. Just days after the Supreme Court split a decision on his executive order on amnesty, thus upholding the ruling of the Court of Appeals for the Fifth Circuit, all of a sudden there is now less responsibility with becoming an American citizen.

If a person is not required to be ready to bear arms in defense of the Union, what responsibility does that person have? Effectively none. He gains all the rights guaranteed by the Constitution, but has none of the responsibility that naturally corresponds to political and civil rights.

This is a disgraceful move by the Obama administration. While the military draft is in place (debating that is an article for another time), every able-bodied male citizen must register for the draft. Removing this requirement to just buy votes is a punch to the gut of Americans who are properly registered with the Selective Service.

Rights without responsibilities seems to be a mantra of the Obama administration, that is rights that are government-given, not God-given. This move exemplifies this attitude perfectly.